There was only one fitting way for Kentucky signee Nolan Hickman Jr. to celebrate when he found out he had been named a McDonald’s All-American, even if there is no all-star game again for him to play in this year.

Hickman, his teammates and his coach at Wasatch Academy (Utah) went to lunch at McDonald’s while his parents also went to McDonald’s and bought a Happy Meal for their youngest child.

“What else can you do?” said Nolan Hickman Sr. “But even without the game, it is still surreal to think your son is a McDonald’s All-American. As a fan and former player myself, my wife and I understand how big this is.

“Then I had a buddy of mine remind me that Nolan is just one of 900 players ever named a McDonald’s All-American. Knowing that number just kind of blew my mind. Nolan was beyond excited. Even without the game, this is a huge deal.”

Future UK teammate Daimion Collins was also named to the Mc- Donald’s All-American team. Both future Cats have also been named to the Allen Iverson Roundball Classic May 7-8 in Memphis and will play on the same team. 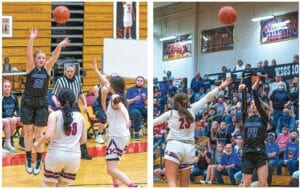 SHARP SHOOTERS IN ACTION — Above left, Letcher County Central High School junior Bailey Kincer shoots and sinks a three-pointer near the end of regulation play in last week’s 14th Region Girls Basketball Championship, won by District 53 rival Knott County Central in four overtimes. Above right, LCC freshman Heidi Bentley was one of several young Lady Cougars to come through with clutch shooting in overtime during last week’s game. Here, Bentley shoots and sinks a three-pointer in the Lady Cougars quadruple overtime loss to Knott Central in the championship game. The final score was 86-79. Both girls return next season. (Photos by Chris Anderson)

Hickman and Collins (Texas) were also both named state player of the year by MaxPreps.

Hickman averaged about 16 points, 3.6 assists and 2.5 rebounds per game in his first season at Wasatch Academy playing against a national schedule. His team got to the Geico Nationals before losing in the first round.

“I still think Nolan is sort of a hidden jewel. Not a lot of national eyes have been on him like they should have been,” his father said. “Some guys are starting to see that now and realize he is one of the best players in the game. He’s had a hell of a run and what he did this year justified his move (from Eastside Catholic High School in Washington) to where he could be playing at a high level every game against the best competition around and get the recognition he deserved.”

The UK signee’s father said his son needed some time to figure out his new teammates and enjoy not “having to do everything” every game. 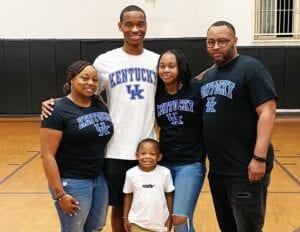 Kentucky signee Nolan Hickman Jr. is pictured with his family. He has improved his overall play this season and also had some struggles his father believes “toughened” him up for next season at UK.

“He could have eight to 10 assists and 12 points. We call that sharing the sugar and he’s good at that,” Hickman Sr. said.

Kentucky assistant coaches Tony Barbee and Joel Justus with Hickman Jr. and coach John Calipari normally checked in once a week. Hickman Jr. will be on campus for summer school. The Hickmans are “excited” about what lies ahead at UK despite the Cats’ 9-16 record last season when they missed the NCAA Tournament.

“They took some losses but it was a tough season just like it was for Nolan and his teammates due to the COVID restrictions,” Hickman Sr. said. “Practicing with masks on, not a lot of bonding time. But it should have helped toughen him up to prepare for what is coming at Kentucky and I actually think it will help him in college.

“He had some struggles making the move to Utah but he made it through the year. Look at all the blessings he had. Things on the court slowed down for him. He got mentally stronger. He improved at reading defenses and got to where he moved better. Overall this year helped him so much.” s

Drake Jackson had already impressed NFL personnel with his toughness before his Pro Day workout at UK last week. He did that at the Senior Bowl when he continued to play despite a grade-one shoulder sprain.

Jackson, a three-year starter at center for Kentucky, is projected as a mid to late-round draft pick in the NFL draft later this month.

New UK offensive coordinator Liam Coen compared Jackson recently to former NFL center John Sullivan, an 11-year NFL veteran. Sullivan was a sixth-round draft pick who finished his career with the L.A. Rams — the team Coen was with before coming to UK.

“The type of conversations that Sully and (head coach) Sean (McVay) would have would just go over a lot of people’s heads,” Coen said. “Drake has that level of understanding about the game.

“He’s obviously done this at a high level for a number of years and I can only foresee him continuing to do so. I do believe with the amount of things that are on centers in the NFL, especially maybe going somewhere where they don’t want too much on the quarterback or have a younger quarterback that they don’t want to put some of those things on, I do think Drake would be a great fit in some of those systems.”

Jackson was the quarterback of UK’s offensive line the last three years and made all the pre-snap calls for that unit. He hopes his football IQ helps and was noticed as the Senior Bowl.

After a superb high school career at Woodford County, Jackson was a coveted in-state recruit but had to prove at 6-2 that he could survive against bigger SEC defenders … and he did. He’s facing the same questions as he prepares to start his NFL career.

“I think once you lose that chip (on your shoulder) you stop getting better and you’ve kind of lost your love of the game,” Jackson said. “You’ve got to find something that motivates you and that absolutely motivates me. That’s something (former UK line) coach (John) Schlarman taught us.” s

Since Kellan Grady played at Davidson it probably should be no surprise that NBA star Steph Curry, a former Davidson player, has been Grady’s role model and favorite player because of the way he played in the NCAA Tournament.

“I had the privilege to actually work out with Steph a couple times when I was at his camp a few summers ago. Beyond his amazing abilities on the court, seeing the way he is dedicated to the game and how he works is something that has inspired me to work with detail and with precision when I’m trying to work on my game,” Grady said after announcing he was transferring to UK for his final season.

“His shooting ability, his confidence is something I think that is arguably the best in the NBA. His ability to score at all three levels and to make floaters, to make shots in the midrange, his in-between game, his court vision. I think we all know I can keep going.”

Curry has helped the Golden State Warriors win NBA championships and is an annual All-Star. That’s why Grady, who scored over 2,000 points at Davidson, pays attention to more than just Curry’s scoring. He calls them the “little things” that separate Curry from other players.

“How he comes off screens, how he moves without the ball. Those are things that I did a lot at Davidson that I think I was able to improve on by watching film and studying guys like Steph,” Grady said. ‘It’s been awesome watching his success at the NBA.” s

Kentucky football signee Jordan Dingle of Bowling Green was not his team’s leading scorer or rebounder, but coach D.G. Sherrill knows what a factor he played in helping the Purples get to the state tournament at Rupp Arena last week. Bowling Green won one game before losing to Ballard in the state quarterfinals

“First of all he is a big, strong presence in there,” Sherrill said after Dingle had seven rebounds, four points and one assist in a win over University Heights. “He does a lot that does not show up on the stat sheet.

“He guards at the bucket, gets a lot of rebounds. Every possession he plays extremely hard. He is a tremendous leader.”

Sherill knows not every elite athlete would accept the role Dingle did this year.

“He is a high-level Division I football player and he accepted this role on our team. He is a great defender and rebound guy,” Sherrill said. “He doesn’t look for shots.

“He does not care how much he scores or rebounds. He just wants to win. I am tickled to coach him. He is a special young man.”

Most Kentucky basketball fans I know were happy for the success Johnny Juzang had in the NCAA Tournament with UCLA, including 29 points and six rebounds in the heartbreaking overtime loss to Gonzaga in the Final Four. He had 137 points in six tourney games, including 15 3-point goals.

Juzang got in 28 games, including two starts, at Kentucky last season playing behind Tyrese Maxey and Immanuel Quickley. His best game probably was his final UK game when he played a season-high 33 minutes and scored 10 points in UK’s 18-point comeback win at Florida.

Juzang said he was homesick for California, so he went home to UCLA — one of close to 20 schools that offered him when he originally picked UK.

He started all but one game and averaged 16 points and 4.1 rebounds per game while shooting 35.3 percent from 3-point range and 87.7 percent at the foul line for coach Mick Cronin, a coach known for his hard-nosed approach and emphasis on defense.

Considering Juzang’s forte was his shooting, it seemed like a risk to play for Cronin when he left UK but it certainly worked out.

“ … I knew that he was defensive-minded, and those are things that drew me, I wanted that. I wanted to be pushed.

Juzang didn’t change his perspective after the loss to Gonzaga.