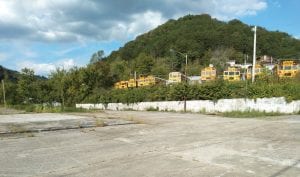 Fit for a Queen? A sister company to the firm that owns 222 Dairy Queen restaurants, including the Whitesburg location, has filed for a permit to build a restaurant on this lot in West Whitesburg. The site has been the home of Lowe’s Inc. and the old Harlow Motor Ford dealership.

A sister company to the firm that owns the Dairy Queen Grill & Chill restaurant on Jenkins Road in downtown Whitesburg has applied for a permit to build a “quick service restaurant” on Hazard Road in West Whitesburg.

Double Seven Development of Minneapolis, Minn., has applied for a floodplain permit from the Kentucky Energy and Environment Department to build a fast food restaurant on the old Lowe’s Home Improvement lot, next door to the Letcher County School Bus Garage. Double Seven Development is a limited liability company managed by Matthew Frauenshuh, who is also principal of Frauenshuh Inc., and CEO of Fourteen Foods, the largest Dairy Queen franchisee in the country.

The name of the restaurant to be built on the old Lowe’s lot is redacted from public filings, and there is no indication whether the company plans to replace the existing Dairy Queen on Jenkins Road, open a second location, or open a different branded restaurant all together.

The lot was formerly owned by Tim Short Chrysler, and contains 2.23 acres. The proposed restaurant would be built on one half of the land, leaving a little over an acre for future development.