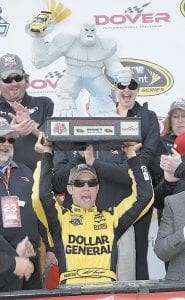 Hard to believe, but it’s time for the Sprint Cup Series to invade Charlotte Motor Speedway for two consecutive weekends of racing under the lights.

The action kicks off this weekend with the Sprint All-Star Race. It’s the one race where no points are awarded and the format is unlike any other race on the schedule .

The field for a Sprint Cup race was reduced from 43 to 40 this season, but the field that takes the green flag for Saturday night’s All-Star race is even more exclusive, with every driver in the field being a race winner. Eleven drivers automatically qualified by winning a Sprint Cup race this season or in 2015. They are: Joey Logano, Jimmie Johnson, Kevin Harvick, Brad Keselowski, Denny Hamlin, Matt Kenseth, Kurt Busch, Dale Earnhardt Jr., Carl Edwards, Martin Truex Jr. and Kyle Busch.

Joining the race winners in the field will be past Sprint Cup champions and previous winners of The All-Star Race. Tony Stewart is the only past champion not in the field by winning a race. Joining him in the starting field are former race winners Jamie McMurray, Kasey Kahne and Ryan Newman.

One of the remaining slots that will complete the starting grid will not be determined until after Friday night’s running of the Sprint Showdown. The Showdown is a 50-lap race that is broken down into three segments. The first segment consists of 20 laps with the winner gaining automatic entry into The All-Star Race. After at least a two-tire pit stop, another 20-lap segment will take place with the winner advancing to Saturday night’s main event. The final segment is a 10-lap sprint to the checkered flag with the winner joining the two previous segment winners in the All-Star Race.

The final driver to make the field for the Saturday night event will not have to race his or her way in, but instead will have to be the winner of the Sprint Fan Vote. Fans have until 5 p.m. May 20 to vote for their favorite driver.

This all-winner field of drivers will take part in a format that has been tweaked since last season in an effort to improve the racing. Like the Sprint Showdown, The All-Star Race will be made up of three segments but will total 113 laps with each segment winner advancing to the main event. The first segment will be 50 laps and it will include a mandatory greenflag pit stop for a minimum of two tires. Once the segment is over, every driver must come down pit road for a minimum two-tire pit stop.

The field will be set for the 50-lap second segment by the order in which the cars get off pit road. This segment will also include another mandatory minimum two-tire pit stop before the 85th lap.

There will be a random draw after the conclusion of the second segment to decide whether the top nine, 10 or 11 drivers will have to come to the pits for a mandatory four-tire pit stop. Those drivers that do not have to come to the pits will start up front for the final segment but will be on older tires. Those drivers who did pit will line up behind those that stayed out according to the order they exit the pits. The final 13 laps will consist of only green flag laps, as caution flag laps will not count.

PIT NOTES: The buzz in the garage area at Dover was that NASCAR was planning on making some changes to the present rules package in an effort to improve the racing for The All-Star Race. Since the race does not award points, it could be used as a test to see how any rule changes will impact the aerodynamics and side forces of the car.