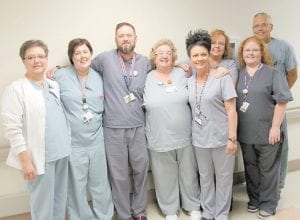 Fugate, a 19-year employee of Whitesburg ARH, is a Radiologic Technologist II in the hospital’s Radiology Department.

The CARES award is given to an employee who during the previous 12 months has exemplified certain standards of quality to patients, their families, visitors, and members of the healthcare team. Employees considered for the CARES award must “communicate” well, be “attentive” to those they serve, be “respectful” to all, provide a good “environment” for care, and work to make others feel “special.” Awards are given monthly. At the end of the year, an overall CARES winner is selected from the monthly winners.

“When reviewing these standards, it is simple to see that Allen is natural choice to represent Whitesburg ARH,” the hospital said in a statement. “Allen is an allaround good individual that is dependable and timely in his responsibilities in the Radiology Department. He is kind and caring to the patients that he comes in contact with, whether it is in the department or on the patient care units. He is a team player and has a great working relationship with his departmental coworkers, the hospital staff and the physicians.” 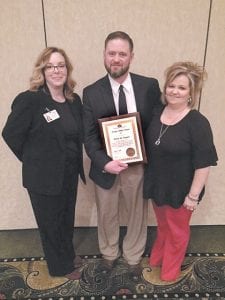 Dena C. Sparkman, Whitesburg ARH CCEO added: “I’m so excited for Allen to be recognized this year: He is just a warm and wonderful young man. He’s great with kids, he’s great with customer service and every single employee likes him.”

“Allen is a very kind, compassionate, patient centered individual,” said Alice Lucas, the hospital’s Director of Radiology. “He takes pride in his work and gives 110%.”

Allen, along with representatives from all ARH facilities, was honored by the ARH Board of Trustees on February 2, 2017 during a special dinner given in their honor in Lexington.