Allen’s journey to UK not a surprise 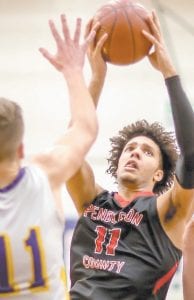 Dan McDonald got to see Pendleton County senior Dontaie Allen play three times at the Under Armour Challenge in Georgia in July and liked what he saw from the 6-6 wing player.

“I liked his size and body type,” said McDonald, program coordinator for Lake Point Sports and a Rivals.com recruiting analyst. “He is a bigger, stronger — not heavy kid — but muscular kid. He’s not a great athlete but he can score from every level. He did everything in the games I saw. He handles the ball well and passes really well. He led the Under Armour event in scoring and was in the top five in rebounds and assists. That’s pretty strong.”

Allen averaged 26.4 points, 6.8 rebounds and 4.8 assists per game in the Under Armour Challenge playing for M.A.T.T.S. Mustangs and had 30 points on 11-for-15 shooting, four rebounds and two assists in the game Kentucky coach John Calipari saw. He had 30 or more points three times in five games and even hit a gamewinning shot when he had a double-double with 32 points and 10 rebounds. 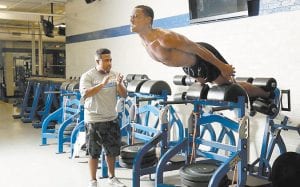 That performance led to Calipari contacting Allen to set up a visit to UK that resulted in a scholarship offer last week. Allen, who grew up a Kentucky fan, said yes almost immediately to become UK’s second recruiting commitment — along with Texas guard Tyrese Maxey — in the 2019 recruiting class.

“People had been talking about him, so we did our research,” Hudson said. “We try to bring in top kids to play here and when we invited them, we really felt like he was still under the radar. This summer he blew up and you could tell he wanted to go to Kentucky. Sometimes this stuff just works out and we are really excited about the game.

“Marshall (County) has a new coaching staff and a new attitude. The Marshall players are looking forward to playing in the spotlight in one of the event’s prime time games and I personally think that will be one of the top games in the state of Kentucky until you get to the state tournament. This is one game I will definitely watch instead of running around doing all the other stuff I usually do.”

Pendleton County coach Keaton Belcher never doubted Allen’s talent and thought playing in Hoop Fest would be a good way to gain recognition across the state. Obviously, that’s not needed now with his commitment to UK.

“When he announced he committed to Kentucky it was a huge celebration in our county,” Belcher said. “Everybody had been on pins and needles waiting to hear about the visit he took. His dream as a kid was to play at the University of Kentucky. His story is a great example of staying patient, being loyal and working hard to accomplish your dream. Kentucky is not only getting a good basketball player. They are getting a good person.”

Steve Quattrocchi, director of M.A.T.T.S. Mustangs, was not surprised that Allen got an offer from UK and then accepted it almost immediately.

“I knew he would likely end up there eventually,” Quattrocchi said. “I’m very proud of Dontaie and thrilled he got to make his choice. Kentucky is his dream school and he is lucky enough to get to attend there and start chasing his dream to reach the next level after his time at Kentucky ends.”

Quattrocchi hopes this might open doors for more Kentucky players to get to play at UK like Derek Willis and Dominque Hawkins did and like Allen will now.

“There are other kids in the state that are Kentucky-caliber in future classes that will hopefully get that same opportunity,” he said.

Benny Snell reminds me a lot of former UK basketball standout Tyler Ulis when it comes to using skeptics as motivation to push himself to succeed.

Ulis was told for years that he was too little to play in high school and then college and then the NBA. Each time, he proved the skeptics wrong.

Snell was a three-star recruit from Westerville, Ohio, a suburb of Columbus. No surprise he was an Ohio State fan and wanted to be a “hometown” hero for the Buckeyes.

“I found myself at camps (in high school) being the best one, but other guys were getting MVPs and all that. From then until now, I have kept the chip on my shoulder and have continued to work hard,” Snell said. “I’m always being downed and don’t get enough credit, and teams are always getting put over Kentucky. That just keeps me motivated to go harder.”

He was just the 56th-rated running back in the 2016 recruiting class but he rushed for 1,091 yards and 13 scores as a freshman and then added over 1,200 yards last season. The other four SEC running backs — Auburn’s Kerryon Johnson, Georgia’s Sony Michel and Nick Chubb, and LSU’s Derrius Guice — who went over 1,200 yards are all now in the NFL.

Snell boldly said at SEC Media Days he was the best running back in the SEC. He’s not backing down from that assertion despite being named to the all-SEC first team in preseason voting by SEC media members.

“I always try to make myself as good as I can be off the field, whether it’s film, practice or more reps. What separates myself from other running backs is that I am very durable. I can get 200-plus carries and still be fine for the rest of season,” Snell said. “I broke my rib during a game last year, but I came in at halftime and ended up going back in, scored and finished the game and didn’t miss any games.

“If it’s a nagging injury, I’m in the training room and I’m going to get it fixed. If it’s something to do with pain tolerance, I’m going to play through it. I’m playing through everything.”

Kentucky freshman guard Ashton Hagans is an intriguing prospect for coach John Calipari this season because he reclassified to get into the 2018 recruiting class and he also has plenty of competition from Quade Green and Immanuel Quickley for playing time.

“Ashton did not rush to get to college to sit on the bench,” said Sporting News college basketball columnist Mike DeCourcy. “He gives them a big presence in the backcourt. Immanuel is tall and lean and is very quick. He’s listed at 6-3 and is close to that. You just don’t see him as being 6-3 because he moves so quickly and darts around the court.

“But how many teams are going to have three high level, five-star point guards on the team. With the way basketball is now, the more guys you have that can attack the better off you are.”

DeCourcy could envision Calipari playing all three together to close out games.

“If they can all make free throws under pressure like I think they can and John (Calipari) feels really good about that, having those three and the versatility it brings is really going to be a huge asset late in games,” DeCourcy said.

Do not underestimate the impact that co-offensive coordinator/ quarterbacks coach Darin Hinshaw has in recruiting.

He was the one who found Stephen Johnson two years ago, got him to Kentucky, and then had him ready to play when Drew Barker got hurt early in the season.

“He is a great guy. We were in there watching film on my visit and going over plays and everything,” Wilson said. “We just clicked. I was so used to the same concepts, same protections I have ran before. We were really on the same page and he liked that a lot. He is excited to coach me. We are both hungry for success and greatness.

“He is a great guy. When we were watching film and I got some protection calls — even with the new names — right, he just started yelling and I thought, ‘I can deal with this.’”

Wilson graduated from high school a semester early to enroll at Oregon in 2016 but redshirted his freshman season before transferring to Garden City Community College. He throw for 5,262 yards and 49 touchdowns his final two years of high school in Oklahoma City and also ran for 709 yards and 11 scores as a senior. He was ranked as the second best prospect in Oklahoma his senior year.

Now he’s locked in a battle with redshirt sophomore Gunnar Hoak to be UK’s starting quarterback.

“My goal is to play in the NFL,” Wilson said. “That has been a dream of mine since I was 5 or 6 years old. I watched Donovan McNabb, Michael Vick, Vince Young. I tried to model myself after them. Just to have the opportunity to do big things in the SEC is awesome and a blessing for me and my family.”

He’s a two-time Pac 12 all-conference selection who averaged almost a double-double per game last season. Yet Stanford graduate transfer Reid Travis knew he had to take a humble approach to joining the talent-laded Kentucky basketball team.

“I’m not going to walk in the door and gain everybody’s trust the first day. That’s something you have to work on day in and day out. Show my work ethic, show that I can be that leader and hopefully when we get into the season they can look at me and kind of lean on me for certain things that I’ve gone through,” Travis said.

“Reality is that I kind of feel like a freshman all over again in my own right as far as being here and being fresh, still going through the system. Any little tidbits I can give them here and there I’m definitely going to do that. Try and mold myself into that role.”

He says going against “high caliber” players daily at Kentucky has already made him a better player in the six weeks he’s been on campus.

“Gotten better at just finishing against length. There’s certain things you can’t replicate until you play some of those better teams like I did the last couple years at Stanford,” Travis said. “When you don’t play a top-10, top-five team. I’m getting to see that every day in practice.

“For me, just going against bigs that are athletic, can move, can jump and just reading the game. Its really helping me just work on my finishing and work on my touch.”

Quote of the Week: “Playing football in Alabama (after moving) from New Jersey was different. Playing in Alabama made me learn a lot about different positions and made me learn that this is how it is really going to be. So, it made me tough. I found a difference between me and others. The game was more competitive. It taught me a lot,” UK senior linebacker Josh Allen, a projected first-round NFL draft pick, on the time in spent in Alabama before moving back to New Jersey for his high school senior season.

Quote of the Week 2: “They kind of shocked me. They were kind of unprofessional. So if they come (back), they come. If they don’t, we’re fine with that too. I thought it would be handled better, but we’re not going to get into a mudslinging contest with them. We’ll take the high road. That’s the way we were raised,” Corey Jeffries on the UK basketball coaches after his son, D.J., de-committed from Kentucky

Quote of the Week 3: “They have guys that really can shoot the ball. They have a lot of leaders on the team this year. I think they’ll have a really good year this year. Cal is doing a great job again. The players really want it and compete at practice. It’s fun to watch,” former UK star Kevin Knox on this year’s team after watching John Calipari’s team practice before leaving for the Bahamas.