By LINDA A. JOHNSON
The Associated Press
TRENTON, N.J. 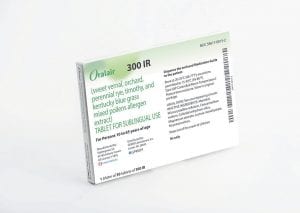 This photo provided by Stallergenes shows the packaging for Oralair, a grass pollen tablet. The drug could become popular with patients who dislike needles or can’t make frequent trips to the allergist — key reasons only about 5 percent of U.S. patients who would benefit from allergy shots get them. (AP Photo)

For decades, seasonal allergy sufferers had two therapy options to ease the misery of hay fever. They could swallow pills or squirt nasal sprays every day for brief reprieves from the sneezing and itchy eyes. Or they could get allergy shots for years to gradually reduce their immune system’s overreaction.

Now patients can try another type of therapy to train their immune system, new once- a- day tablets that dissolve quickly under the tongue and steadily raise tolerance to grass or ragweed pollen, much like the shots.

The downside: The pills must be started a few months before the grass or ragweed pollen season. That means it’s too late for people with grass allergies, but the time is now for ragweed allergy sufferers.

The Food and Drug Administration in April approved two tablets from Merck, Grastek for grass pollen and Ragwitek for ragweed, plus a grass pollen tablet called Oralair from Stallergenes.

The tablets could become popular with people who dislike pills that can make them drowsy or don’t provide enough relief. They’ll likely appeal even more to patients with severe allergies who fear needles or can’t make frequent trips to the allergist, key reasons that only about 5 percent of U.S. patients who would benefit from allergy shots get them.

Meanwhile, new treatments for other types of allergies, including to peanuts and eggs, are in various stages of testing and could turn out to be big advances.

Drugmaker Merck & Co. has a tablet for house dust mite allergies in final patient testing that could hit the market in two or three years, and it’s considering other therapies. France’s Stallergenes SA is testing a tablet for birch tree allergies and, with partner Shionogi & Co. Ltd. in Japan, tablets for allergies to dust mites and Japanese cedar pollen. Britain’s Circassia Ltd. has a cat allergy treatment in final testing and six others in earlier testing.

A handful of companies also are looking at possible new ways to administer immunotherapy, including drops under the tongue, capsules and skin patches, said Fort Lauderdale, Florida, allergist Dr. Linda Cox, former president of the American Academy of Allergy, Asthma and Immunology.

The new tablets are not right for everyone, particularly patients with allergies to multiple substances, Szekely cautioned.

That was the case with one of her patients, 10-yearold Samantha Marshall of Mentor, Ohio, who has been getting allergy shots since last fall.

“She’s not loving them,” said her mother, Rachel, who recently asked Szekely about switching to the tablets. Szekely explained that shots are more effective because Rachel is also allergic to weeds and dust mites, and the shots she receives are a customized mix of extracts to all those substances.

The tablets are also pricey: Merck, based in Whitehouse Station, New Jersey, is charging about $8.25 per daily tablet and Stallergenes about $10. Insurers are expected to cover most of the cost, as they usually do with allergy shots. Those generally cost only $15 to $25 per visit without insurance, because they’re given by a nurse.

Allergy tablets are less likely to trigger a dangerous allergic reaction than shots, which have been used for a century, Cox said.

In Merck’s testing, about 5 percent of patients experienced tingling, itching or swelling in the mouth or tongue, said Dr. Sean Curtis, Merck’s head of respiratory and immunology research. Less than 1 percent had serious reactions, nearly all after the first dose.

“After the second, maybe third week, I started noticing a difference in the symptoms,” said the 41-year-old contracts administrator. “It was pretty significant, not feeling like you have a cold all the time.”

Prevalence of hay fever in the U.S. has declined slightly since 2000, according to National Center for Health Statistics data. In 2012, about 17.6 million adults, or 7.5 percent, reported having hay fever, as did about 6.6 million children, or 9 percent. Millions more don’t see a doctor and get by with nonprescription medicines like Benadryl or Claritin.

Treatment can be tricky because of body chemistry differences and the complexity of the immune system, which is still poorly understood.

“You can’t just have one size fits all,” Szekely said.

Other patients fare better on prescription pills or nasal sprays. But for patients with severe allergies, those aren’t enough. They suffer — though hardly in silence — or try allergy shots.

Rarely, the shots cause systemic allergic reactions, from hives and itching to dangerous airway narrowing, because small amounts of allergen circulate in the bloodstream. That’s why patients must be observed by a nurse for a half-hour after each shot.

With the new tablets, as they dissolve, the grass extract inside drains into lymph nodes in the neck, which produce protective antibodies against the effects of pollen that’s inhaled or gets in the mouth. Since the extract is unlikely to enter their blood, patients need only be watched the first time, then can take the pills at home.

Typically, patients get allergy shots of gradually increasing dosage two or three times a week initially, then once a week for up to nine months, then monthly. After three years, at least two-thirds have minimal symptoms, while most of the rest have reduced symptoms.

With the tablets, patients start at the top dose, at least three months before allergy season, and continue through the season or even year-round.

The grass pollen tablets aren’t likely to take off until next spring, although Stallergenes’ U.S. marketing partner, Greer Laboratories Inc. of Lenoir, North Carolina, made Oralair available and began promoting it to allergy specialists in May.

Merck has followed study participants through three years of treatment and then two years after that, when patients still reported significantly reduced symptoms.

But Cox, the Florida allergist, expects that benefit to last at least eight years after treatment ends, nearly as long as with allergy shots.

It won’t be clear whether the tablets will be a hit with patients or big moneymakers for their manufacturers until next spring, when patients and more doctors will be familiar with them.