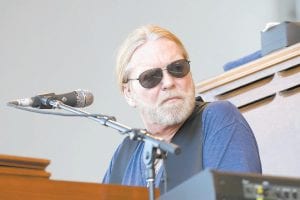 “I never dreamed we would have enough money to pay rent doing this — but, thankfully, it’s gone a ways past that,” Allman said.

He offered fans what he called the band’s “rockand roll-blues-jazz-fusion” music.

“But where it comes from doesn’t really matter,” Allman said before the performance.

Thefans didn’t care what the music was called, either.

“I’ve been here since noon,” said David Patterson, of Luling.

“They are just the epitome of classic rock,” he said. “I’ve been all over the South watching their shows, and the last few years, since they’ve put together this band, man, they really rock. They haven’t sounded this good since Duane.”

Duane Allman, Gregg’s brother and co-founder of the band, was killed in a motorcycle accident in 1971.

“Theyhave so many great songs, I’m just glad to be here to hear them,” he said.

Ron Trevino, of San Jose, Calif., sat to hear an interview with the band’s drummers, Butch Trucks and Jai Johanny “Jaimoe” Johansen, inside the grandstand before the closing set.

“I like the fact that they’re all individuals and they create magic when they play,” he said. “I’ve seen them a bunch of times and each time they do a song in a diff erent way and it’s always beautiful.”

Improvisation is the basis of the music, said Warren Haynes, one of the band’s guitarists for the last 20 years. “We take a diff erent approach to the music night after night,” he said. “We do a diff erent set list every night which helps keep it fresh.”

Eppy Sisneros, who traveled with Trevino, said the Allman Brothers brought them from the West Coast.

“They are the original jam band and they’ve stood the test of time,” Sisneros said. “They went against the grain when most commercial music was just doing two to three minute songs — they were doing nine to 11 minutes.”

“We love it down there,” he said. “The food. The people. It’s one of the first places we played pretty regularly.”

Allman and Haynes said they look at the group as a family.

“My relationships with those guys has grown and gotten stronger and stronger,” Haynes said. “I’m very comfortable now, enough to even write songs together. It wasn’t always that way. That’s a great thing.”

Gordon Brown and his wife, Debbie, traveled from their home in Toronto, Canada, and said the Allman Brothers’ show was worth the trip.

“They gave a great show!,” Brown said after listening to the band play “Statesboro Blues” and “Midnight Rider.”

“They have such history and such phenomenal talent. That’s good stuff , man. Good stuff .”