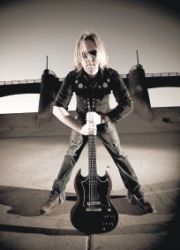 Devon Allman’s Honeytribe will perform in Lexington on Oct. 8.

Devon Allman’s Honeytribe, a powerful, rock/blues trio from St. Louis, will perform at Buster’s Billiards and Backroom in Lexington on Thursday, Oct. 8. Show time is 7:30 p.m. Tickets are $10 in advance, $12 at the door.

Honeytribe’s debut CD, To r c h, was released in August of 2006 and received many positive reviews in publications

such as Guitar Player, Guitar

For more information about next week’s show, visit www.bustersbb.com.