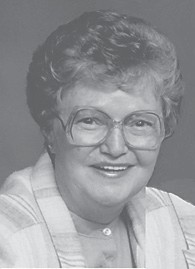 Born in Neon, she was the daughter of the late Edward and Mary Alice Carter Haddix. She was also preceded in death by her husband of 54 years, Lanford Cann “Lanny” Craft, and two sisters, Lila H. Webb and Roberta H. Kincer.

She worked at WPAFB and the Lebanon Correctional Institution as a secretary, and was a member of the Order of the Eastern Star, Prosser Chapter 367 for 50 years.

Surviving are a brother, Eddie Haddix, Jr. of Richmond; nephews and caregivers,

Jim Wagner and Les Wagner and wife Pat; niece, Rebecca Hasty and husband Larry; and other nieces and nephews.

Funeral services were held May 19 in Middletown. Burial was at the Woodside Cemetery.