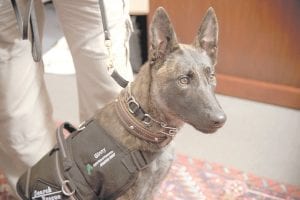 Mine rescue dog Ginny at a training exercise. (AP Photo/Courtesy Tim Cox via The Bristol Herald-Courier)

We’ve all heard of a canary in a coal mine, but what about a Dutch Shepherd?

Equipped with an infrared camera and atmospheric gas detector — along with her extraordinary sense of smell and unmatched agility — the Bristolbased company’s first four-legged employee has been trained since she was three days old to search for missing, trapped, injured or unresponsive humans in unstable conditions or confined areas. Alpha says Ginny is the first canine specifically trained for such situations.

The 48-pound, brindle-colored canine with an affinity for chicken and rice dog food was officially introduced June 1 at the Governor’s Cup Mine Rescue Contest in Cedar Bluff.

It’s the latest move in a push to emphasize safety by Alpha, which bought Massey Energy last year after a 2010 explosion at Massey’s Upper Big Branch mine in West Virginia that killed 29 men, the worst U.S. coal mining accident in decades. Alpha now has more than 180 mines and processing plants in Kentucky, including Letcher County, Pennsylvania, Virginia, West Virginia and Wyoming.

Still Alpha has received various citations from the U.S. Mine Health and Safety Administration, including violations this month at a West Virginia mine where a conveyor belt had caught fire and inspectors subsequently found inoperable smoke detectors and fire suppression systems, and accumulations of explosive coal dust as deep as 18 inches.

Alpha CEO Kevin Crutchfield called Ginny a “tremendous new asset for mine search and rescue, both for our company and the industry.”

Born in April 2010, Ginny was selected from a group of 44 puppies at a Williamsburg, W.Va., kennel that provides some of the highest performing dogs in existence to branches of the U.S. military, law enforcement and homeland security. Trained by Bill Dotson, a canine behaviorist with expertise in search and rescue, Ginny honed her skills for two years and continues to train with the more than 200 miners on Alpha’s 23 mine search and rescue teams.

And honed she has. Ginny, who now trains weekly in Abingdon, can leap more than six feet from a standing position, and can detect a scent up to one mile away. She also has what Dotson calls “nerve strength,” so in difficult situations she won’t give up and will continue with her mission of wading through rubble piles and navigating dark, tight spaces underground.

“It’s almost an emotional experience (watching Ginny work),” said Rick McAllister, Ginny’s handler, Alpha’s director of continuous improvement and the employee who came up with the idea that the company should train a dog specifically for mine search and rescue. “You start running comparisons in your mind on how you would find this person or that subject if the dog wasn’t there. It’s just a remarkable thing to see. They are so focused, they are so driven.”

McAllister declined to say how much it cost to buy, train and keep Ginny as a member of the team. But he said it’s “not a big number,” or nothing to keep someone from wanting to do it.

When she’s not training, Ginny travels across the country to attend various mine industry conferences — but she’s usually the only canine attendee. She also makes public appearances with her handler to help educate children and communities about coal mining and outdoor safety.

While the distinction between the pointy-eared pup and her human counterparts is obvious, Alpha says Ginny’s is just another member of the team — albeit with more hair than most of the other mine rescuers. Like other members of the team, Ginny wears special mine safety gear, including a customized, protective vest embroidered with her name that shields her from possible wounds and lacerations. And the gas detector she wears makes a sound when she enters dangerous atmospheric conditions, prompting her to immediately retreat.

Mine rescue teams like Alpha’s train tirelessly in hopes they’ll never have to use their skills. But history — and federal law— illustrates the need for mine rescue teams, and maybe even the addition of canine cohorts to bolster those efforts.

“This project will be totally successful if we never, ever have to use her,” McAllister said. “Mine rescue is a brotherhood. You support every coal mine in the United States and maybe even in the whole world. If there’s an incident somewhere, even outside of Alpha, we will probably be considering how we would be able to help. It’s more than just what we’re doing for ourselves, we’re adding a degree of protection for coal mining wherever it’s being done.”

In January 2006, back-to-back disasters in West Virginia killed 14 men. Twelve were trapped after an explosion at International Coal Group’s Sago Mine near Buckhannon, most succumbing to carbon monoxide poisoning, while two miners died in a fire two weeks later at Massey Energy subsidiary Aracoma Coal Co.’s Alma No. 1 mine.

Several months later, five miners died in an explosion at Kentucky’s Darby No. 1 Mine.

The three disasters led to a new federal law, with reforms including the deployment of underground tracking systems so miners can be located in a crisis and refuge chambers to shelter those who can’t escape. The law also expanded the number of mine rescue teams and required better training.

But it didn’t stop the deaths: A methane- and coal dust-fueled explosion ripped through Massey’s Upper Big Branch mine in April 2010.

The fatal blast prompted heightened safety inspections and renewed scrutiny at mines across the country. Massey was then purchased by Alpha, which said it has worked to turn around Massey’s troubled safety record and right the problems at former Massey operations.