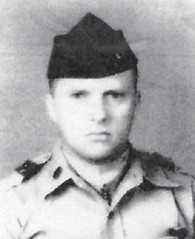 Formerly of Isom, he had served in the U.S. Army as a paratrooper in the 101st Airborne Unit.

He was a retired electrician.