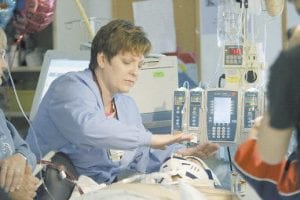 Nurse Donna Audia performs Reiki on a patient at the University of Maryland Medical Center in Baltimore. (AP Photo)

At one of the nation’s top trauma hospitals, a nurse circles a patient’s bed, humming and waving her arms as if shooing evil spirits. Another woman rubs a quartz bowl with a wand, making tunes that mix with the beeping monitors and hissing respirator keeping the man alive.

“It’s self-hypnosis” that can help patients relax, he said. “If you tell yourself you have less pain, you actually do have less pain.”

Alternative medicine has become mainstream. It is finding wider acceptance by doctors, insurers and hospitals like the shock trauma center at the University of Maryland Medical Center. Consumer spending on it in some cases rivals that of traditional health care.

People turn to unconventional therapies and herbal remedies for everything from hot flashes and trouble sleeping to cancer and heart disease. They crave more “care” in their health care. They distrust drug companies and the government. They want natural, safer remedies. 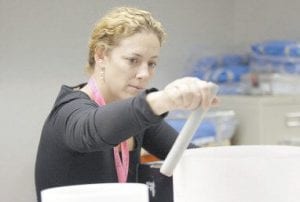 Bonnie Tarantino rubs a bowl with a wand to make soothing sounds during a Reiki therapy session with a patient in the trauma center at the University of Maryland Medical Center in Baltimore. (AP Photo)

But often, that is not what they get. Government actions and powerful interest groups have left consumers vulnerable to flawed products and misleading marketing.

Dietary supplements do not have to be proved safe or effective before they can be sold. Some contain natural things you might not want, such as lead and arsenic. Some interfere with other things you may be taking, such as birth control pills.

“Herbals are medicines,” with good and bad effects, said Bruce Silverglade of the consumer group Center for Science in the Public Interest.

Contrary to their little-guy image, many of these products are made by big businesses. Ingredients and their countries of origin are a mystery to consumers. They are marketed in ways that manipulate emotions, just like ads for hot cars and cool clothes. Some make claims that average people can’t parse as proof of effectiveness or blather, like “restores cell-to-cell communication.”

Even therapies that may help certain conditions, such as acupuncture, are being touted for uses beyond their evidence.

An Associated Press review of dozens of studies and interviews with more than 100 sources found an underground medical system operating in plain sight, with a different standard than the rest of medical care, and millions of people using it on blind faith.

How did things get this way? Fifteen years ago, Congress decided to allow dietary and herbal supplements to be sold without federal Food and Drug Administration approval. The number of products soared, from about 4,000 then to well over 40,000 now.

Ten years ago, Congress created a new federal agency to study supplements and unconventional therapies. But more than $2.5 billion of tax-financed research has not found any cures or major treatment advances, aside from certain uses for acupuncture and ginger for chemotherapy related nausea. If anything, evidence has mounted that many of these pills and therapies lack value.

Yet they are finding ever-wider use:

— Big hospitals and clinics increasingly offer alternative therapies. Many just offer stress reducers like meditation, yoga and massage. But some offer treatments with little or no scientific basis, to patients who are emotionally vulnerable and gravely ill. The Baltimore hospital, for example, is not charging for Reiki but wants to if it can be shown to help. Other hospitals earn fees from treatments such as acupuncture, which insurance does not always cover if the purpose is not sufficiently proven. The giant HMO Kaiser Permanente pays for members to go to a Portland, Ore., doctor who prescribes ayurvedics — traditional herbal remedies from India.

— Some medical schools are teaching future doctors about alternative medicine, sometimes with federal grants. The goal is educating them about what patients are using so they can give evidence-based, nonjudgmental care. But some schools have ties to alternative medicine practitioners and advocates. A University of Minnesota program lets students study nontraditional healing methods at a center in Hawaii supported by a philanthropist fan of such care, though students pay their own travel and living expenses. A private foundation that wants wider inclusion of nontraditional methods sponsors fellowships for hands-on experience at the University of Arizona’s Program in Integrative Medicine, headed by well-known advocate Dr. Andrew Weil.

— Health insurers are cutting deals to let alternative medicine providers market supplements and services directly to members. At least one insurer promotes these to members with a discount, perhaps leaving an incorrect impression they are covered services and medically sound. Some insurers steer patients to Internet sellers of supplements, even though patients must pay for these out of pocket. There are networks of alternative medicine providers that contract with big employers, just like HMOs.

A few herbal supplements can directly threaten health. A surprising number do not supply what their labels claim, contain potentially harmful substances like lead, or are laced with hidden versions of prescription drugs.

“In testing, one out of four supplements has a problem,” said Dr. Tod Cooperman, president of ConsumerLab.com, an independent company that rates such products.

Even when the ingredients aren’t risky, spending money for a product with no proven benefit is no small harm when the economy is bad and people can’t afford health insurance or healthy food.

But sometimes the cost is far greater. Cancer patients can lose their only chance of beating the disease by gambling on unproven treatments. People with clogged arteries can suffer a heart attack. Children can be harmed by unproven therapies forced on them by parents who distrust conventional medicine.

Mainstream medicine and prescription drugs have problems, too. Popular drugs such as the painkillers Vioxx and Bextra have been pulled from the market after serious side effects emerged once they were widely used by consumers. But at least there are regulatory systems, guideline-setting groups and watchdog agencies helping to keep traditional medicine in line.

The safety net for alternative medicine is far flimsier.

The latest government survey shows the magnitude of risk: More than a third of Americans use unconventional therapies, including acupuncture, homeopathy, chiropractic, and native or traditional healing methods. These schools and accreditation groups. Some states license certain types, like acupuncturists; others do not.

Tens of millions of Americans take dietary supplements — vitamins, minerals and herbs, ranging from ginseng and selenium to fish oil and zinc, said Steven Mister, president of the Council for Responsible Nutrition, an industry trade group.

“We bristle when people talk about us as if we’re just fringe,” he said. Supplements are “an insurance policy” if someone doesn’t always eat right, he said.

In fact, some are widely recommended by doctors — prenatal vitamins for pregnant women, calcium for older women at risk of osteoporosis, and fish oil for some heart patients, for example. These uses are generally thought to be safe, although independent testing has found quality problems and occasional safety concerns with specific products, such as too much or too little of a vitamin.

Some studies suggest that vitamin deficiencies can raise the risk of disease. But it is not clear that taking supplements will fix that, and research has found hints of harm, said Dr. Jeffrey White, complementary and alternative medicine chief at the National Cancer Institute. A doctor with a big interest in nutrition, he sees the field as “an area of opportunity” that deserves serious study.

So does Dr. Josephine Briggs, director of the National Center for Complementary and Alternative Medicine, the federal agency Congress created a decade ago.

“Most patients are not treated very satisfactorily,” Briggs said. “If we had highly effective, satisfactory conventional treatment we probably wouldn’t have as much need for these other strategies and as much public interest in them.”

Even critics of alternative medicine providers understand their appeal.

“They give you a lot of time. They treat you like someone special,” said R. Barker Bausell, a University of Maryland biostatistician who wrote “Snake Oil Science,” a book about flawed research in the field.

That is why Dr. Mitchell Gaynor, a cancer specialist at the Weill-Cornell Medical Center in New York, said he includes nutrition testing and counseling, meditation and relaxation techniques in his treatment, though not everyone would agree with some of the things he recommends.

“You do have people who will say ‘chemotherapy is just poison,'” said Gaynor, who tells them he doesn’t agree. He’ll say: “Cancer takes decades to develop, so you’re not going to be able to think that all of a sudden you’re going to change your diet or do meditation (and cure it). You need to treat it medically. You can still do things to make your diet better. You can still do meditation to reduce your stress.”

Once their fears and feelings are acknowledged, most patients “will do the right thing, do everything they can to save their life,” Gaynor said.

The Dietary Supplement and Health Education Act of 1994 exempted such products from needing FDA approval or proof of safety or effectiveness before they go on sale.

“That has resulted in consumers wasting billions of dollars on products of either no or dubious benefit,” said Silverglade of the public interest group.

Many hope that President Barack Obama’s administration will take a new look. In the meantime, some outlandish claims are drawing a backlash. The industry has stepped up selfpolicing — the Council for Responsible Nutrition hired a lawyer to work with the Council of Better Business Bureaus and file complaints against problem sellers.

“We certainly don’t think this is a huge problem in the industry,” Mister said, but he acknowledges occasionally seeing infomercials “that promise the world.”

“The outliers were making the public feel that this entire industry was just snake oil and that there weren’t any legitimate products,” said Andrea Levine, ad division chief for the business bureaus.

The FDA just issued its first guidelines for good manufacturing practices, aimed at improving supplement safety. Consumer groups say the rules don’t go far enough — for example, they don’t set limits on contaminants like lead and arsenic — but they do give the FDA more leverage after problems come to light.

The Federal Trade Commission is filing more complaints about deceptive marketing. One of the largest settlements occurred last August — $30 million from the makers of Airborne, a product marketed with a folksy “invented by a teacher” slogan that claimed to ward off germs spread through the air.

The truth is, supplements lack proof of safety or benefit. Asked to take a drug under those terms, “most of us would say ‘no,'” Allen said. “When it says ‘natural,’ the perception is there is no harm. And that is just not true.”