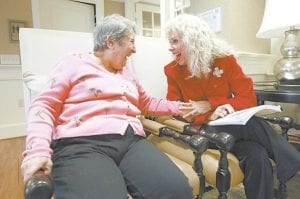 Alexis McKenzie, right, executive director of The Methodist Home of the District of Columbia Forest Side, an Alzheimer’s assisted-living facility, laughed with resident Catherine Peake, in Washington earlier this year. Combined results released this week from two studies of an experimental Alzheimer’s drug suggest that it might modestly slow mental decline, especially in patients with mild disease. (AP Photo)

Combined results from two studies of an experimental Alzheimer’s drug suggest it might modestly slow mental decline, especially in patients with mild disease.

Taken separately, the studies missed their main goals to significantly slow the mind-robbing disease. But pooled results found 34 percent less decline in mild Alzheimer’s patients compared to those on a dummy treatment for 18 months. Doctors say the results do not seem strong enough to win approval of the drug now. But they show researchers are on the right track by trying to clear the sticky deposits that clog patients’ brains.

The drug is being developed by Eli Lilly & Co. and is called solanezumab (sol-ah-NAYZ-uh-mab). Results were reported earlier this week at an American Neurological Association conference in Boston.

About 35 million people worldwide have dementia, and Alzheimer’s is the most common type. In the U.S., about 5 million have Alzheimer’s. Current medicines such as Aricept and Namenda just temporarily ease symptoms. There is no known cure.

Solanezumab is one of three drugs in late-stage testing that seek to alter the course of Alzheimer’s. The two studies each had about 1,000 patients, about twothirds with mild disease and one-third with moderately severe Alzheimer’s, in 16 countries. Their average age was 75.

The main measures were two tests, one reflecting language, memory and thinking and the other, ability to perform daily activities such as eating and grooming. The combined results on the mild disease patients showed a nearly 2-point difference in the roughly 90-point score on thinking abilities.

“It’s a small difference,” said Dr. Rachelle Doody of Baylor College of Medicine. She heads a nationwide research network funded by the National Institute on Aging that did an independent analysis of Lilly’s results on the studies and presented them Oct. 8 at the conference.

Still, “you slow the decline” with the drug, she said.

“It’s certainly not the home run we all wanted, but we’re very encouraged by these results,” said Maria Carillo, senior director of medical and scientific relations for the Alzheimer’s Association, which had no role in the research.

A Lilly official said the company will discuss next steps with the Food and Drug Administration.