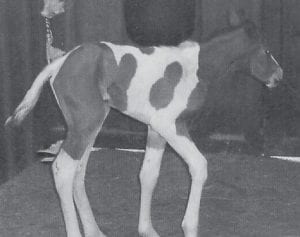 LITTLE COWAN COLT – This colt was born in May at the Little Creek Farm on Little Cowan. The happy owners are Dylan and Hayden Bentley, who named the colt “Sunny D.”

I am glad to be feeling better but am still a little weak.

We were very sorry to hear about Kendall Banks dying suddenly. Our sympathy to his wife, Catherine, and all his family. His funeral was Saturday. His sons, Jack and Phillip, with their mother, Irene, came from Indiana and son Doug from Florida. They also attended church at Little Cowan on Sunday.

Kendall was the son of Charlie and Thelma Banks. He grew up on Little Cowan. He served in the Navy during the war. Following in the steps of his father, he became an expert carpenter, as did his sons after him. He worked in Indiana and Florida before returning to Kentucky for retirement.

Kendall was a goodhearted man who loved life and lived it to the fullest. He was a proud father and grandfather. His many interests included traveling and hiking in the mountains. He was an avid fisherman and often shared his catch by frying many fish and hushpuppies for large gatherings of family and friends. He attended church at Little Cowan and participated in a neighborhood Bible study group. His last years were spent happily fulfilled with his wife, Catherine, who shared his interests.

We also extend sympathy to Don Lucas and family in the death of his sister, Minnie Williams.

Jonathon Lucas and Melinda Barton were married on July 10. He is the son of Don and Linda Lucas and she is the daughter of Dennis and Donna Barton of Dickenson County, Va.

Linda Lucas, with her daughter, Beth Callahan, and granddaughters, Katie and McKensie Callahan, spent a week at the beach. They enjoyed the sun, sand, water, seafood, and shopping on the boardwalk.

Jason and Amanda Brown vacationed at Cherokee Lake last week. They then joined Randy and Stephen Brown at Somerset for the weekend, where they went canoeing and fishing. Amanda outdid them all by catching 57 fish.

Bessie Day, with grandson David, visited her son, James Randall, and family in South Point, Ohio, on July 4. They went to Ashland, where they enjoyed an impressive air show and fireworks.

Billie Ann Gilley and family attended the McIntosh family reunion, which was held at the home of Verlon and Sue Banks at Rockhouse. There were 30 family members present. They had a good time seeing family from Ohio, Mississippi, Breathitt County and Whitesburg. They had plenty of food.

Maxie and Richard Lucas have a new great-granddaughter, Chloie Nashay. Her parents are Brandon and Pearlie Stidham Webb.

Glen and Sue Banks, Edison Banks, and Marty and Mary Richardson met with Tyler and Amanda Galer and Kyle at the home of Tyler’s parents, Mr. and Mrs. Fred Galer, near Prestonsburg. They enjoyed a delicious barbecue.

Mattie Vern Banks, with her granddaughter, Cherie, and husband Rick and sons Dakota and Tyler, visited Virginia Brown. The boys were interested in seeing where their grandma grew up. They drove across Pine Mountain to see the view and visited Chester and Verna Rayburn. They also visited the log cabin at the home of Elsie Boggs, where their great-greatgrandfather was born and raised in the 1800s. Cherie, who is a school librarian in Bowling Green, shopped in Whitesburg for Appalachian literature.

Belated happy birthday to Shade Boggs on July 3 and Dustin Crawford on July 6. They are Bennett and Linda Combs’s grandsons.

Kae Fisher held a “birthday social” for Trish Day at her home on Thursday. Attending the party were Trish Day, Sebrina Melton, Debbie Caudill, Pauline Adams, Lena Brashears, Vivian Day, and Kae Fisher. The girls were treated to a delicious pasta lunch. Kae is a very good cook. The girls enjoyed swimming in the Fishers’ new pool and lying in the sun and socializing. It was a fun day for all.

Doris Collins’s daughter, Morgan Eversole, was graduated from Letcher County Central High School in May. Morgan has started working at Wendy’s in Whitesburg. She will be attending Southeast Community College in the fall.

Creedance Cook recently came home from Cardinal Hill. He will continue to receive therapy at home. Creedance was critically injured in an automobile accident last year. He is still showing improvement. Please continue to keep Creedance in your prayers. Also remember his wife, Jessica, and children Lexie and Jessie.

B.J. Well Service treated its employees to a steak dinner Saturday at Carr Creek Lake. It was a time for all of the employees to get together with each other and their families. David and Kae Fisher enjoyed the day and said that the food was delicious. Kae said that the cook was certainly to be commended for the wonderful steak.

Michael Campbell called his dad, Johnny Campbell, last week from Afghanistan. Michael said that two of the men in his unit were killed and one of his friends was shot and would be returning to the States. Afghanistan is not in the news as much as Iraq, but our men and women are being killed and injured there also. Please remember all of the servicemen and women in your prayers, no matter where they are stationed.

Billie Ann Gilley will be having surgery this week at St. Joseph Hospital in Lexington. Please remember Billie Ann and her family. Billie Ann had cancer in her foot a few years ago and now it has come back in the lymph glands in her leg. We certainly pray that Billie Ann will have a full and quick recovery.

Opal Froste did well with her heart surgery. Her daughters, Stella and Judy, are with her in Lexington. She is supposed to come home this week. Stella will come home with her and help her through her recovery. Don’s daughter, Susie, stayed with him for several days but then she had to go to Knoxville where her mother was having a knee replacement. His son, Phillip, had come from Raleigh, N.C., to stay with him now.

Laura Gale Harris and her daughters, Cassie and Hannah, have gone to Virginia Beach for a vacation. A friend of Laura’s also went with them. Hopefully they are having good weather and enjoying themselves.

Martha Ann and Mike Wenning moved into an apartment this week. They sold their home in Ohio and will be living in the apartment until they can finish their home on Cowan. Martha Ann works for Job Corps and Mike is retired from GM.