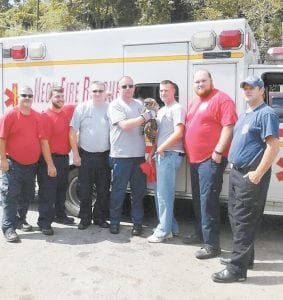 Pictured left to right are Mike Baker, Cory Baker, Scott Collins, Spanky Bolling (holding the owl), Shane Childers, Charles Polly and Brian Chapman in front of the ambulance getting ready to transport the owl to Whitesburg.

On August 8, while driving an ambulance, Scott Collins and Wallace ‘Spanky’ Bolling Jr. found an owl beside the road in Haymond. It had been hit by a car and had a broken wing.

They rescued it (very carefully and with the help of thick work gloves) and several members of Neon Volunteer Fire and Rescue and EMT students transported the owl to the Letcher County Raptor Rehabilitation Center in Whitesburg.

Mitch Whitaker imme- diately transported the owl to Hazard for medical care. The owl will recover at the Raptor Rehabilitation Center and, if possible, will be released when it recovers. If it has to have its wing amputated, it will live the rest of its life at the center.

Mitch Whitaker stated that this was the first time he had received any bird for rehabilitation via an ambulance.

As soon as the veterinarian in Hazard tells the sex of the bird, Spanky Bolling will name it. He has picked out Harriet or Harry in memory of his grandmother, Harriet Bolling, who died last week. 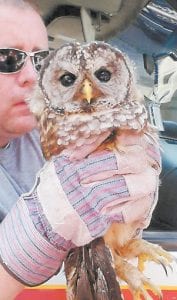