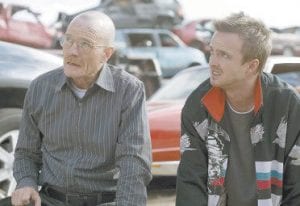 Is "Breaking Bad" the most relevant series on the air right now? The show most relatable to viewers?

A knee-jerk response might say otherwise. Now in the beginning of its second season on Sundays at 10 p.m., this AMC drama has a most unlikely hero: high school chemistry teacher Walter White, who cooks up Methamphetamine and deals it big time.

Ah, but wait. Without endorsing the odious crank trade, "Breaking Bad" holds up a mirror in which many Americans can see themselves — especially these days.

When the series began a year ago, Walt was a painfully by-thebook scientist, husband and father who, caught in the economic squeeze of the middle class, was losing his struggle to make ends meet. Then he was diagnosed with terminal lung cancer and given just a couple of years to live.

Handed this sentence, Walt was jolted into action. He knew no social safety net would break his fall, or that of the family he’d be leaving behind. He had to hatch a plan, fast.

As the first season of "Breaking Bad" unfolded, Walt forged a desperate alliance with a ne’er-dowell former student, Jesse Pinkman, to equip a motor home as a rolling meth lab, and leave his family financially secure. Thanks to the scripts’ twisted brilliance, the Albuquerque setting (with its desert and suburb visual extremes), and a glorious cast (led by Aaron Paul as Jesse and Bryan Cranston in his Emmy-winning role as Walt), the series was never less than riveting.

Meanwhile, Walt won understanding from viewers as a bornagain renegade.

"I think they saw that the show isn’t about the glorification of a drug," Cranston says, "but about a man and what he does when he feels backed against a wall. People hate the abhorrent behavior, but they root for the character."

That was then. A year later, Americans are reeling from one financial scandal after another, and from a monetary meltdown with no end in sight. Now they may feel even more in tune with Walt.

In a scene from last Sunday’s season opener (which Cranston directed), Walt made a quick estimate of his family’s expenses in the years ahead: college tuition for two kids; mortgage payments; food, clothing, utilities. Familiar stuff.

All told, $737,000 is what Walt figures he must raise for his family before he dies. This means quickly pulling off 11 more drug deals.

Cranston, who dealt in laughs as the addled dad on "Malcolm in the Middle" for seven seasons (and who turned 53 last Saturday), lists a few things standing in Walt’s way.

"His wife is finding out he’s telling her lies about what he’s doing," Cranston notes. "His brother-inlaw, who is a drug-enforcement agent, is getting closer and closer to the truth. And Walt is dealing with REAL criminals — guys who will stick a knife in you if you cross them, or THINK you crossed them!"

You say you have trouble relating? Just take a gander at your amazing, shrinking 401(k). Talk about breaking bad! That should put you in a more receptive mood.

"Looking at our show here at the beginning of season two, I do find myself feeling that it seems more timely than I ever thought it would be," says "Breaking Bad" creator Vince Gilligan.

It wasn’t the show he originally had in mind.

"What first interested me was the idea of someone who’s been good all his life, and then breaks bad, in the old Southern use of the phrase," says Gilligan, an alumnus of "The X-Files" who hails from Richmond, Va. "Walter White had walked the straight and narrow his whole life, and then suddenly decided to become a criminal, with all the fits and starts, all the mistakes, all the anxieties provoked by such a decision. That’s what primarily intrigues me."

But "Breaking Bad," by chance, is in sync with its moment. Without even meaning to, it has come of age.

"It does speak to the middleclass pinch," Gilligan says. "I’d be flying in the face of all good sense right now to say the show is not about the economy."

For everyone who watches TV, a trusty adage resonates like never before: "It’s the economy, stupid!" But apart from "Breaking Bad," TV storytelling doesn’t do much to address that shared obsession of American life. Nor does it seem much inclined to, in the future.

Sure, a handful of pertinent comedies are vying for a network slot next season. One possible ABC sitcom is "Canned," about a group of friends who all get laid off the same day. Another would star Kelsey Grammer as a Wall Street high roller who loses his job and returns to his family and smalltime hometown. Fox is reportedly considering "Two-Dollar Beer," a comedy set in a fading blue-collar community in Detroit.

But don’t look for dramas to acknowledge common economic woes. Viewers prefer that their TV shows not remind them, at least in any realistic form. Or so goes the industry’s conventional wisdom.

"Breaking Bad" demonstrates the dramatic potential of ordinary people, and does it with extraordinary power. Savor Walt this season as he continues his slow but irresistible migration to the dark side.

"He doesn’t have the skill set for that world," Cranston says. But you can’t blame him for trying. He’s one of us. This is why, more than ever, "Breaking Bad" keeps you hooked.