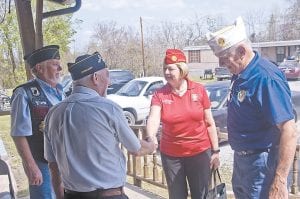 AMERICAN LEGION NATIONAL COMMANDER Denise Rohan shakes hands with Commander Jack Holbrook of the Douglas Day Post 152 on Pine Mountain as Otis Hall, a member of Post 104 in Neon (left) and Department of Kentucky Commander Bill Stewart look on. Rohan is the first woman to be elected National Commander of the American Legion, and the first national commander to visit the post at Whitesburg. (Photo by Sam Adams)

The first woman to serve as a National Commander of the American Legion brought her new vision for the veterans’ club to Letcher County recently in a visit to Douglas Day Post 159 on Pine Mountain.

Denise Rohan said she plans to visit Legion halls in all 50 states to spread the word — the American Legion should be about family.

A U.S. Army veteran, Rohan didn’t re-enlist because she got married, her husband was in the Army, too, and the Army couldn’t guarantee they would be stationed at the same base. Instead, she stayed home and learned there’s more to the military than enlisting.

“I found out real quick that the families serve, too,” she said.

Families move from base to base whenever the service member does, and she wants the American Legion to provide a support system for those spouses and children who are uprooted every few years, or who have to spend months or years with a loved one deployed overseas.

Rohan said her plan will be based on “the four pillars of the American Legion”: Veterans Affairs & Rehabilitation, National Security, Americanism, and Children & Youth.

Rohan said she had been to Fort Knox, Fort Campbell, Richmond and to a new veterans’ cemetery in Hyden before arriving in Whitesburg. She said her husband is a native of Ludlow in northern Kentucky, but she had never been to the other areas of the state.