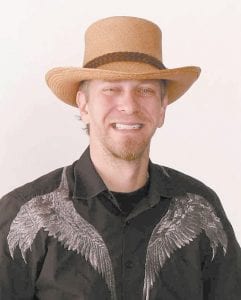 The fourth winner of NBC’s “America’s Got Talent” television show will headline the Mountain Heritage Festival this Saturday night.

Country music singer Kevin Skinner, who won $1 million and the opportunity to headline a Las Vegas show two years ago, will take the stage to play some of his originals and some well-known covers at 9:30 p.m. at the Mountain Heritage Festival Village stage. Admission is free.

“ You just never know what to expect from me,” said Skinner, of the western Kentucky town of Mayfield. “I really like to entertain my fans.”

On August 4, 2009, Skinner, who at the time was a 35-yearold unemployed farmer, performed Garth Brooks’ “If Tomorrow Never Comes” live on the TV show and became a fan favorite.

“America’s Got Talent” judge Piers Morgan told Skinner after his performance that it was “one of the most emotional, powerful performances I have seen in a long time.”

“After winning the show, it was a traumatic change for me,” said Skinner. “I’m just a good ole country boy who likes to hunt.”

Skinner hadn’t been to New York before winning the talent competition.

“Long Ride”, Skinner’s debut album, was released on March 17, 2010 and contains 10 songs Skinner is proud to say he wrote, including “Like It’s The Last Goodbye”.

Skinner has opened for Charlie Daniels and George Jones.

“ I’m just your average country boy and I just caught a break,” said Skinner. “It has been a lot of fun and I am looking forward to coming to your town.”

He said fans tend to relate to the lyrics in his songs. Skinner wrote “Soldier’s Last Breath” after hearing on the news that more troops would be sent to Afghanistan. He said Vietnam veterans would come up to him after a concert in Las Vegas and tell him they felt like the song was written just for them.

“They would be in tears and would give me a hug,” said Skinner.

“I’m always looking forward to playing for my fans,” he said.