An alternative to addiction 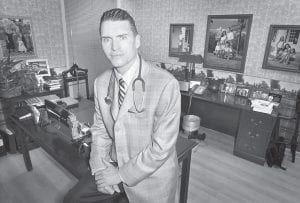 PAIN ALTERNATIVES – Dr. Timothy Deer (left), a physician at the Center for Pain Relief in Charleston, W.Va., and a nationally recognized expert on the treatment of pain is one of many doctors who treat pain that are looking for alternatives to potentially addictive medication. (AP Photo)

People suffering from chronic pain look for relief everywhere, but few could have expected to find it in the toxin of a sea snail.

Yet ziconotide, a synthetic form of just such a toxin, is getting new attention from doctors as a way to relieve the suffering of cancer patients, people with nerve damage and others with chronic pain that is often resistant to more common treatments.

The drug – which won Food and Drug Administration approval in 2004 – is not only effective, but doctors say it also avoids some of the downsides of more familiar pain medications like morphine. That can be a boon to patients weary of escalating doses of potentially addictive medication that may be ineffective for some.

Some patients “are taking so many oral medications that they’re basically zombies,” said Dr. Timothy Deer, a physician at the Center for Pain Relief in Charleston and a nationally recognized expert on the treatment of pain.

This fall, the Polyanalgesic Consensus Panel – a group including doctors from around the U.S. as well as other countries – recommended that doctors consider ziconotide as a first option rather than waiting for other treatments to fail.

“We think this is going to be a major improvement in patient safety and patient outcomes,” said Deer, who co-chaired the panel and has seen the drug yield positive results both as a researcher and in his practice.

The recommendation comes as doctors who treat pain are looking for alternatives to potentially addictive medication.

More than 200,000 pounds of codeine, morphine, oxycodone, hydrocodone and meperidine were purchased at retail stores during 2005, enough to give more than 300 milligrams of painkillers to every person in the country.

Dr. Ahmet Ozturk said physicians at Cabell-Huntington Hospital’s Pain Management Center have a range of treatments available for people in pain, but the majority of patients have prescriptions for narcotic painkillers.

“It’s not the first choice. It’s the last choice, but we use it if the patient has tried everything else,” said Ozturk, the center’s medical director.

In addition, the growing use of narcotic painkillers has led to problems with its illegal sale and use as a street drug.

“We see here in West Virginia and around the country the problems with abuse and addiction,” Deer said.

West Virginia has one of the highest rates of use of prescription painkillers in the country, according to the federal Drug Enforcement Administration, which has led to problems with addiction and crime.

The misuse of those drugs can also be fatal: the number of West Virginians dying from overdoses went from 21 in 1998 to 460 in 2006, with prescription painkillers accounting for seven of the 10 most common drugs found in overdoses.

Ziconotide, both because of its non-narcotic nature and of how it’s administered, is less likely to cause such problems, advocates say.

The drug – which is marketed by Elan Pharmaceuticals under the brand name Prialt – is most often pumped directly into the spinal column through the use of a computer-regulated, catheter-and-pump system.

Intraspinal pumps have been used to treat chronic pain for more than two decades, but the drugs involved have mostly been narcotic painkillers like morphine. The system isn’t foolproof, as problems have ranged from rare cases of inflammation and infection to a more common problem: the opioids used aren’t always effective for people in chronic pain.

The prospect of a treatment that avoids some of those problems is a welcome development for chronic pain sufferers, who often find themselves trying a tiring range of treatments in hopes of finding relief.

“So many people think there’s got to be that 100 percent answer, and they keep looking for it,” said Penney Cowan, executive director of the American Chronic Pain Association.

Cowan’s group advises people that some level of pain may be permanent, and advises them to take an active role in their treatment.

“Patients are savvy,” he said. “They’re hearing about the drug and asking their doctors about it. We’re seeing it being prescribed more and more.”