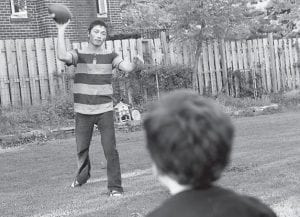 Dimitiros Philliou, 17, played football with his nephew, James Williams, 5, in Silver Spring, Md., on April 17. At 16, Philliou was shot in the heart and had emergency surgery on his aorta, a surgery seldom performed because most patients bleed out before reaching the hospital. (AP Photo)

He felt as if he were suff ocating, struggling to breathe despite the bullet hole in his chest.

Shot in the aorta, near where the body’s biggest artery leaves the heart, somehow 16-year-old Dimitrios Philliou did not bleed to death before the ambulance screeched up to the hospital.

So doctors took a gamble: Could they save him, not with huge open surgery that itself can kill, but with a patch snaked inside his tornup aorta?

More than a caution against kids playing with guns, the fight to save Philliou offers a glimpse into the uncharted territories of emergency medicine, where usually fatal injuries can spark unconventional treatments.

His team now is writing up the case for a medical journal, a teachable example of how less invasive treatments are starting to play an increasing role even in the aggressive, seconds-count world of trauma care.

It started as a typical Saturday night in November 2008, Philliou and some friends hanging out in his family’s basement in Silver Spring, Maryland, a Washington suburb, eating pizza. Then Philliou showed off the small handgun he had found, one he had thought was jammed because he could not get it to fire. But as his friends fooled around, this time the gun went off .

The 911 call came around 8 p.m.: A teen accidentally shot. Emergency workers found Philliou gasping, his skin bluish. They worked a breathing tube down his throat and bypassed suburban hospitals, headed for a Level I trauma center in the nation’s capital that sees many gunshot wounds.

Remarkably, Philliou woke up in the ambulance and yanked out his breathing tube. Arriving at Washington Hospital Center, he was coherent enough to answer some questions of trauma nurse Toby Kyle. Most important, he was not in shock, his blood pressure still OK.

Scans showed the bullet hit Philliou’s aorta twice. Medical journals make clear that a chest-level injury to this huge blood vessel, which runs from the heart to the groin, is fatal 85 percent of the time.

Here is why Philliou was hanging on: The aorta is shaped like a candy cane, its arch coming out of the top of the heart before curving down. The bullet punctured both the arch of the aorta and a large vein that touches it, making a channel between the two. Because pressure is higher in an artery, blood was flowing back into his own vein, preserving it.

“He was lucky enough it bought him some time,” says Kyle.

Then the bullet exited from the descending part of the aorta, leaking blood into the chest.

Not too long ago, cardiac surgeon Dr. Ammar Bafi would have had one choice: Cut open the breastbone, deep-cool Philliou, stop his heart and sew up the arch, then make another big incision on the side of the chest to repair the second hole. He says the operations bring more than a 25 percent risk of death.

Artery specialist O’Donnell’s alternative: Fix the lower hole by threading a sleevelike stent up through a leg artery and popping it open to block the leak with what essentially is an artifi- cial lining.

Car crashes that throw the driver against the steering wheel can tear that descending part of the aorta, and in 2005 doctors began fixing those blunt injuries with this kind of graft. O’Donnell bet it would seal the more dangerous penetrating injury of a gunshot, too.

It took a graft more than .5 inch (12.7 centimeters) wide and 2 inches (5.1 centimeters) long to fit this teen athlete, but it worked, stabilizing him.

On to the upper hole. This one sat on a curve, and O’Donnell threaded in a smaller patch, but it did not form a complete seal. Time to reassess.

“When they say they’ve never seen this before, it kind of throws you,” says Jim Philliou, the teen’s father, who remembers doctors heading off to brainstorm the next step and returning to say, “It’s still 50-50, but here’s what we want to do.”

The next day, surgeon Bafi cracked the teen’s chest after all — but the earlier patching meant he could skip stopping the heart for a far safer, easier surgery to seal that remaining hole.

More than 150 children and teens die every year in the United States from unintentional firearm injuries, and the Centers for Disease Control and Prevention estimates nearly 4,000 more received emergency room treatment for them in 2008. Philliou had joined the survivors: Home in a week, and back on the high school football field nine months later.

He remembers bits of the trauma — the taste of gunpowder, trying to suck in air, his mother crying.

And as he recovered, he says he learned to let go of the anxiety that has characterized his teen years.

“I always felt socially awkward around a lot of people. … I was scared of a lot of things,” says Philliou, who’s looking forward to college late this year. “This year, I’ve actually been happy the entire year.”