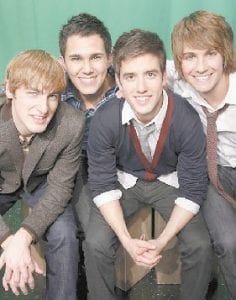 Four hockey-loving teenage pals from the nation’s frigid heartland get a crack at music stardom as a boy band in sunny L.A.

What a break! But the deal almost collapses when the excitable record exec, Gustavo Rocque, picks only one of the lads at an audition in their Minnesota hometown.

Unacceptable. On “Big Time Rush,” Nickelodeon’s new comedy series, an all-or-nothing pact unites these chums. They stand firm against Gustavo, who, after seething and ranting, agrees to sign them all. Almost before they can stash their hockey sticks, they’re heading west.

But once there, they discover that show-biz success calls for more than any old song-anddance.

In fact, initially their song-anddance needs a lot of improvement. Gustavo has to whip them into shape, and fast. Alas, they find more on their things-to-do list than catching rays by the pool and flirting with cute girls.

“The show is all about the wild ride these guys go on trying to achieve their dream while still remaining friends,” says Marjorie Cohn, Nickelodeon’s executive vice president of original programming and development.

“It’s also about learning how to take responsibility, having your friends’ backs, handling romantic crushes — all the kid issues, played out against a show business background. The guys aren’t just handed the keys to the kingdom.”

With a comic-caper style, rousing spirit and snippets of music and dance, “Big Time Rush” is an engaging romp that should tickle the network’s core audience (ranging roughly between 6 and 14) — plus many parents. Fun is fun.

The series pilot, aired in November, snagged some 3.5 million viewers.

The 20-segment season, which debuted this week, is airing on Mondays at 8:30 p.m. The lads have already discovered, to their dismay, that their quest for a hit song won’t exempt them from hitting the books at school.

“Big Time Rush” was created by Scott Fellows, who already scored for Nickelodeon with the zany “Ned’s DeClassified School Survival Guide.” Like that series, “Rush” has sharp writing, snappy pacing, and it spoofs the entertainment industry with relish.

James, also 19, is a LaJolla, Calif., native whose early singing skill earned him a spot in the San Diego Children’s Choir. His character, alone among the foursome, had already dreamed of being a famous pop star, which turned “him into a narcissist — but in a harmless way.”

Logan, a 20-year-old native of Dallas-Fort Worth, calls his character the reasonable, grounded one. “He says, ‘Guys, let’s think this through before we do it.’ But he isn’t afraid to be goofy and crazy.”

Carlos, 20, from Weston, Fla., somewhat sheepishly acknowledges competing on the MTV musical reality flop “Making Menudo” back in 2007. His character, he says, “isn’t the brightest, but he’s the one who keeps the other guys from being boring. He does anything he thinks might be fun.”

Finding these fellows was tough, says Nickelodeon’s Cohn, explaining that “Big Time Rush” was given the green light two years ago, which unleashed a crosscountry talent search and auditions in a half-dozen cities.

“There was a triple-threat nature for what we needed them to do,” Cohn says. “The acting and the singing were really challenging, and then you needed to find guys who looked diff erent from each other and who had the required complementary voice qualities.

“Dancing came last on the list because we figured: How bad could they be?” Then she laughs.

“I’m not 100 percent comfortable with myself dancing yet,” acknowledges Kendall, in a separate interview. Yet, hearing that, Carlos jumps in, “He’s good! He’s very dedicated and he gets his stuff down.”

Around 1,500 hopefuls were considered for the four roles before Kendall, the final and most elusive piece of the puzzle, was cast last August. Then filming started.

Already, says James, “we’ve been able to put our own flavor into the show about us becoming a band in real life, as well as in the episodes.”

With “Big Time Rush” produced in partnership with Sony Music, its future holds promise for hit recordings and concert tours.

“The story arc will mirror their actual lives,” says Cohn, even if the comic flavor serves more like a fun house mirror.

“We aren’t trying to be anything we’re not,” Logan sums up. “We’re regular guys. But in the show, we’re able to say, ‘Hey, sometimes you got to take a chance — and great things may come from it.’”