Deep in the Atlantic Ocean, explorers have found what may be the most valuable sunken treasure in history. This spring, a company called Odyssey Marine Exploration announced that its deep-sea divers had raised 17 tons of colonial-era coins from a shipwreck in the sea. The more than 500,000 silver and gold pieces were flown by cargo jet to a secret location in the United States, where they are being examined by experts.

The coins, most of which are silver, have an estimated value of $500 million. According to rare coin expert Nick Bruyer, some coins may earn the treasure hunters several hundred dollars. But others will bring in many thousands of dollars. Odyssey hired Bruyer to examine the coins. A coin’s value is based on its condition and rarity, as well as the story behind it.

Until now, the most valuable shipwreck discovery was made in 1985 in the waters near the Florida Keys by treasure-hunter Mel Fisher. The coins and loot he found in a sunken 17th-century Spanish galleon were worth a reported $400 million. 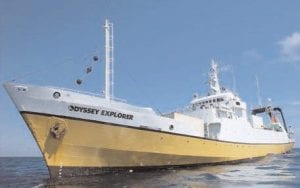 Odyssey has not released specific details about the sunken treasure. The project has been given the name “Black Swan.” The location of the ship and its country of origin remain unknown to the public. According to the company’s co-chairman Greg Stemm, there is still uncertainty about the ship’s nationality, size and age. A formal announcement with more information will come later, he promised.

Odyssey has not revealed what types of coins were found or their country of origin. But court records show that the treasure might have come from a 17th-century merchant ship that sank off the coast of England. Bruyer believes the discovery is the largest of its kind. “I don’t know of anything equal or comparable to it,” he said.

Odyssey makes money from selling coins and artifacts. The company uses state-of-the-art technology to find underwater treasures. A 2003 find of a sunken steamship from the Civil War-era earned Odyssey millions of dollars. Finding a second major shipwreck is important to the company. “The outside world now understands that what we do is real business and is repeatable and not just a lucky one-shot deal,” Stemm says. – Suzanne Friedman 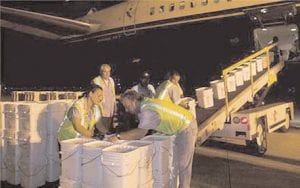 A ground crew unloads more than 17 tons of silver coins recovered from the “Black Swan” shipwreck.