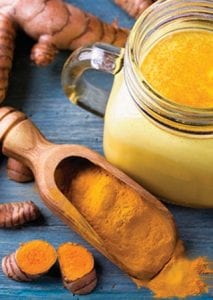 Turmeric has “spiced up” the news over the past few years! It’s a unique ingredient with an ancient history. Turmeric is thought to have originated in India over 5,000 years ago. It’s also a common ingredient in Chinese medicine and is the centerpiece of Ayurveda, a traditional Indian medicine.

Turmeric is a spice present in nearly every Indian curry dish, and its flavor is best described as earthy.

Typically, most recipes recommend combining turmeric with black pepper. Black pepper contains a compound called piperine, which inhibits the metabolic breakdown of turmeric in the gut and the liver. This allows higher levels of turmeric compounds to remain in the body (i.e., it increases its bioavailability), which may increase the effects of turmeric. However, it also can affect the breakdown of other compounds, including certain drugs. If you’re unsure about how combining turmeric and black pepper will affect your prescription medicines, consult your doctor.

Turmeric is the star of this spice blend and adds a burst of flavor to my recipe for Spiced Golden Milk. You also may want to add 1/2 teaspoon of Turmeric Spice Blend to recipes for vinaigrettes, pizza dough, rice dishes, eggs and egg salad, sauteed vegetables, lentils, soups and smoothies.

Combine ingredients in a jar.
Cover tightly and shake before
using. Keep in a cool, dark place.
Makes about 1/2 cup.

1. Place water in a medium
saucepan over high heat. Whisk in
turmeric spice blend and stir until
the mixture is well-combined,
about 2 to 3 minutes. Add coconut
or almond milk, honey and coconut oil to the turmeric mixture in
the saucepan. Bring to a low boil.
Reduce heat to low and simmer,
stirring occasionally, until flavors
have melded, about 6 to 7 minutes.
2. Golden milk can be made up
to 5 days ahead of time. Allow the
milk to cool, store it in an airtight

glass container and keep it refrigerated. Shake the milk to combine,
and warm before serving. Makes
2 cups.