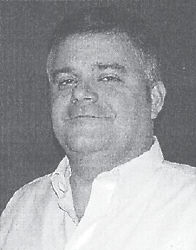 By day, Chuck Anderson runs the financial aid office at Hazard Community and Technical College, but his after-hours time is spent serving the City of Jenkins.

Chuck Anderson was reelected this month to his third term to the Jenkins City Council. A total of 12 names were on the ballot for the six-member council. Anderson was the top third vote-getter. He didn’t even campaign — no bumper stickers, no door-to-door visits. “I won on my reputation,” he said.

“I wanted to help the community where I have lived most of my life and wanted to learn more about government and politics,” Anderson said. “I have definitely achieved those goals.”

Anderson served as chair of the Jenkins Homecoming Day Festival, which made money this year. “We had one of the best attendances in August,” he said. He also manages the city’s website and has other roles in the day-today operation of running the city.

Anderson sees similarities between his city council job and his job as financial aid director. “You have got to take care of your students and make sure all the information is correct; if there’s a problem, you need to respond quickly. It’s the same with the city, if there is a culvert overflowing, you have to step in to get it take care of.”

Anderson, 42, came to HCTC in 1998. Before that, he worked for Southeast Kentucky Community and Technical College. He holds a bachelor’s degree in business and social science from the University of Virginia’s College at Wise. He and his wife, Sonia, who works at Whitaker Bank in Jenkins, have two sons, Sean, 12, and Jack, 6.

Anderson has a great deal of pride in his town. He applauds Jenkins Mayor Charles Dixon and his emphasis on getting abandoned homes torn down. “We’re trying to be a role model for other towns,” Anderson said. His service to Jenkins pays only $25 a month but he doesn’t do it for the money. “I love where I live and I want to make it better.”