Angler stands to win tourney without having to wet a line 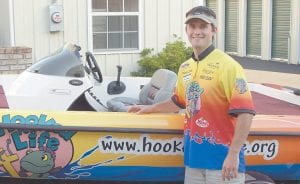 What began as a dream of owning an expensive new outboard engine for his fishing boat has turned into a real "fantasy fishing experience" for one Letcher County man.

Phillip Little, 31, of Little Cowan, is one of two finalists who remain eligible to win more than $60,000 in prizes to be awarded as part of engine-maker Evinrude’s "Ultimate Fantasy Fishing Experience."

Little will be on a stage at Lake Murray near Charleston, South Carolina later this week when Evinrude officials announce the winner of the contest during a weigh-in for the 2008 Forrest Wood Cup — the Super Bowl, World Series and Daytona 500 for the world’s top professional bass fishermen.

Little admits to fantasizing just a little when he went on-line in March to look at Evinrude’s outboard engines, some with price tags as high as $21,500. While on Evinrude’s web site, Little saw an invitation to compete in a virtual game in which contestants were charged with picking would place in five major professional bass fishing tournaments sponsored by FLW Outdoors. After signing up and making good choices in two tournaments in April, at Lewis Smith Lake in Alabama and Lake Norman in North Carolina, Little seized the contest points lead after completion of the May 14 tournament at Beaver Lake in Arkansas. It was then that Little realized that the fantasy of owning one of Evinrude’s top outboards could become a real ity if he won the contest.

"I could never imagine I would be one of the final two with a chance to win," Little said this week. "It was well worth logging on."

Little, a lifelong fisherman who often competes "on the amateur side" of professional bass fishing tournaments, finds humor in the fact that he is about to win a major "fishing" tournament without even wetting a line.

"I’ve been doing a lot better in the fantasy league," joked Little, a graduate of Whitesburg High School and Alice Lloyd College.

Little said he has been in love with fishing since the day he put his first line into the shallow waters of Smoot Creek as a young child. He credits his parents, Charlie and Glennis Little of Cowan, with helping him develop his skills as an angler.

"For as far back as I can remember, one of the two of them would take me to Carr Creek Lake," he said.

When he’s not busy driving to and from Pikeville, where he works reviewing black lung claims for the U.S. Department of Labor, it’s a safe bet that Little will be doing something related to bass fishing.

If Little can’t be found making casts on a lake, he probably will be busy volunteering with the Christian outreach ministry Hooked for Life. With help from the First Baptist Church of Whitesburg, Little has started a local chapter of Hooked for Life which meets at the Whitesburg Housing Authority and has 10 young fishermen among its members.

Little said that before he notified by Evinrude that he was among the two contest finalists, he already had plans to be at Lake Murray later this week to help staff an information booth for Hooked for Life. He spent time in southern Georgia earlier this summer volunteering as a camp counselor for the organization.

Little will be making the trip to South Carolina without wife Beth, an x-ray technician at the Whitesburg hospital who is on a 17-day Christian mission in the African country of Tanzania.

Little also credits the fact he has a college education to the sport of fishing, pointing out that he originally attended Murray State University in western Kentucky with the idea of obtaining a degree in fisheries biology before returning home to attend Alice Lloyd, where he earned a degree in biology.

"That played a big part in me going to college," he said.

If Little is selected as the grand prize winner of the "Ultimate Fantasy Fishing Experience" he will receive a prize package that includes a 2008 Ranger Z520 Comanche bass boat valued at $34,000, an Evinrude E-TEC 250 H.O. outboard valued at $25,100, and a $2,500 gift card to Cabela’s outfitters. Little would also win a day on a lake fishing with the Evinrude pro of his choice.

"I would be lying if I said I won’t be a little disappointed if I don’t win," said Little, who will celebrate his 32nd birthday while he is away. "But I’m taking it as an opportunity to help promote the Hooked for Life ministry. It’s going to be a good birthday present either way."

FLW Outdoors is named in honor of Forrest L. Wood, who founded Ranger boats. The company originated in Gilbertsville, Ky., near Kentucky Lake.