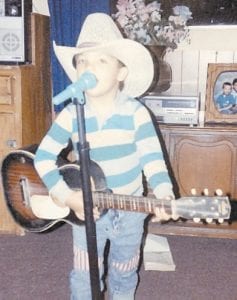 Steven Holbrook is doing his George Strait impersonation of “Gotten Good at Goodbye”.

I forgot to tell you all about our little fall break trip to Pigeon Forge, Tenn. My husband, my daughter Joy Hampton, her three children and myself left Friday and came home Saturday night. None of us are fans of crowds.

We have never been to Dollywood Amusement Park or any of the other things in the Smokies that are always so crowded. Our grandkids are also big animal lovers, so most of the time we include in our trip something to do with animals .

This time we went to the Deer Farm and Exotic Animal Petting Zoo and then to the Tuckaleechee Caverns. We were also planning on the Rainforest Adventure, but we ran out of time.

Anyway, the petting zoo was wonderful and they had so much fun petting animals such as kangaroo, donkey, Belgian horse, zebra, fallow deer, and humongous bull elk, and of course, goats. Before we went in the animal lots there were two cats and my middle granddaughter Drew Eden immediately went to them and started loving on them.

I started telling my second grade teacher, Mrs. Lorraine Kuracka, about our trip to the petting zoo today and it reminded me of a story about Drew and a stray cat that came to our house one day. 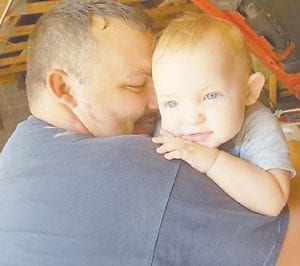 Over the 35 years we have lived here on Stinking Branch we have had quite a few stray animals come down off the mountain behind our house, cats in particular. Most of them have been pretty tame and took right up with the grandkids.

The story I want to tell you though happened when Drew Eden was about six years old. We were outside and we could hear a cat meowing like crazy back up on the hill behind the house.

We could tell by the sound it was getting closer all the time. Well, I told her to just don’t pay any attention and the cat would work its way down to us. Sure enough, it did.

Drew said she could tell it was really hungry so we went in the house to get it something to eat and it went right in with us. I told her to just leave it alone and it would go out when we did. 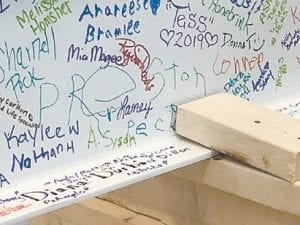 Signatures on the final beam to be placed in the Critical Care Unit in Cincinnati Children’s Hospital will include that of Laney Webb.

So, we got it a piece of bologna and went back out, but it didn’t follow us. I started looking at it close and it looked like it was very pregnant. Then, it started wandering through the house and into the bedroom closet and sniffing around. I was afraid it was hunting for a place to have kittens.

We started trying to make her leave and go back outside and she wouldn’t. She ran up under the bed and when we would rake a broom under there she would just run back into the closet.

This went on for awhile until we blocked all her escape routes so that she would have to run out of the bedroom. I told Drew to go to the kitchen and open all the doors.

So, I swept the broom under the bed again and she ran out of the bedroom and through the house and then right back in the bedroom. I went to the kitchen and asked Drew what happened, why didn’t she go out the door?

She said, “Wait a minute, Granny, I think I might have misunderstood.” I looked around and all the cabinet doors were open and the refrigerator door was open. The doors going out of the house were closed. I said, “Well, Drewby, I did say open all the doors.

They now own five cats and four of them are rescue cats. The other one was given to them by Mom’s neighbor, Wendell Cook.

Another person that seems to have a way with animals is one Oma Hatton’s boys, Billy Hatton. I get to see Billy just about every day at the rec center.

One of my friends that I work out with was telling me a story about Billy and an ostrich. Seems when he was working one day driving a truck up in Marlowe, he heard some of the other men talking on the CB about some kind of bird they were seeing as they were driving up in Marlowe.

He went to it and it was an ostrich. He coaxed it into his truck and all was fine until he shut the door on it. He said it kicked the windshield and broke it. When you all see him get him to tell you the rest of the story, I can’t do it justice.

Steven is the youngest son of Kenneth and Delores Tacket Holbrook. When he was a toddler I was always trying to get him to let me kiss his cheeks and I had to pay him a quarter for every little peck.

Actually, I think I was the one that suggested I would give him a quarter. Anyway, he had the fattest little cheeks. You know the kind, the kind you just love to pat on and kiss on. Well, now his son Canaan James is paying me back for all those quarters I paid Steven. I love kissing his little cheeks now. He will be one year old. We are planning on having his birthday party at Mommy’s this Saturday.

Some of the things going on this week that I have seen on Facebook seem very exciting. The first one is a giveaway going on this coming Wednesday, Thursday, and Friday the 23rd through the 25th on the Work Day Wake Up Show with Kevin and Larry Kevin Day on 103.9.

The giveaway is a pair of tickets to see the Charlie Daniels Band and special guests, the Kentucky Headhunters, this Saturday night Oct. 26 at the Appalachian Wireless Arena in Pikeville.

They will be giving away a pair of tickets each of these three mornings. So listen and win from your live and local morning show 6–9 a.m., Monday-Friday on 103.9 The Bulldog!

The second thing I saw on Facebook and wanted to mention was the post from Michelle Webb about getting to put Laney’s name on the final beam going into the Cincinnati Hospital’s new Critical Care Building. The beam is about to be put in place but before they place it they are giving patients a chance to have their names forever written on part of the building. What a wonderful idea. I’m so happy Laney’s name is written on that beam as a survivor.

I’ll end here with prayer requests for all our loved ones that are suffering with cancer and its treatments. There are so many that are having major problems with the treatments and have just decided to not take anymore. Remember them in your prayers.

Also, remember all those that have lost loved ones, especially my pastor, Bill Jones, and his wife Sandy.

Oma’s plea once again to be in church Sunday will be the way this column ends for another week. Also, if your church has services Sunday night or throughout the week, God expects you there then.