Animal Planet aims to get edgier 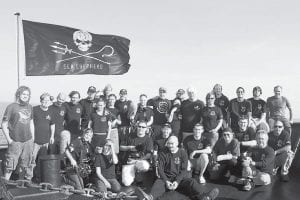 Animal Planet worked with the Sea Shepherd Conservation Society, activists considered either heroic defenders of wildlife or dangerous meddlers, depending on your politics, for the new miniseries, “Whale Wars,” which is expected to air this fall. (AP Photo/Animal Planet)

Animal Planet’s desire to become less warm and fuzzy means exposure to some unaccustomed issues, like danger on the high seas and journalistic fairness.

A network crew returned to port in Australia two weeks ago after tagging along on a mission to interfere with a Japanese whaling expedition in the Antarctic. A miniseries about the experience, “Whale Wars,” is expected to air this fall.

To make the series, Animal Planet worked with the Sea Shepherd Conservation Society, activists who are considered heroic defenders of wildlife or dangerous meddlers, depending on your politics. On this trip, the group tossed rancid butter on Japanese ships to make the decks slippery and spoil whale meat, and diplomatic intervention was needed after two society members climbed aboard a Japanese ship.

“There is an inherent excitement in what they do,” said Charlie Foley, Animal Planet’s vice president of development. “It’s always dangerous and there are also questions about whether this is something they should be doing. It’s not a prototypical Animal Planet story, and that’s one of the reasons we were attracted to it.”

Best known for its annual cacophony of cute, the Puppy Bowl, Animal Planet is particularly popular among children and older viewers.

But that’s not where the money is in television. Animal Planet craves young adult viewers, so it is promising “gripping entertainment” and is trying new series that “bring out the raw, visceral emotion in the animal kingdom.”

Even though other networks passed on “Whale Wars” when pitched by the Tennessee-based producers Rivr Media, primarily because of the danger and cost of insuring a camera crew, Animal Planet pounced. Its sister network, Discovery, has a major hit with “Deadliest Catch,” about dangerous work in a forbidding ocean environment.

The Antarctic mission, dangerous work in a forbidding ocean environment, is “like a giant game of Battleship,” Foley said, with activists hunting Japanese ships over a vast ocean. The scenery is spectacular, he said.

The physical risk to crew members (a camera knocked overboard turned out to be the biggest casualty) is not the only chance Animal Planet is taking with “Whale Wars.” The network puts its reputation on the line by collaborating with an organization that has such a strong point of view.

The Sea Shepherd Society is known for its aggressive tactics and public relations savvy, said Dan Fagin, director of the Science, Health and Environmental Reporting program at New York University. The group sails under the Jolly Roger and has been accused of trying to sink ships. The International Whaling Commission, devoted to protecting whales, criticized the society for jeopardizing safety at sea with the Antarctic mission.

Supporters say that while others might condemn the killing of whales, the society is actually trying to stop it.

Animal Planet was there to observe and document, Foley said, comparing the network’s role to journalists embedded with military units.

“To really understand what motivates them and understand what they do, they really need to be on the boat – literally and figuratively,” he said. “This is not an endorsement.”

Rivr Media and independent producer Dan Stone developed the idea for the series, said Rob Lundgren, the company’s president. He described Stone as an “avid supporter” of the Sea Shepherd Society who has contributed money to the group.

“We’re all really intrigued by people who want to … make a difference on the planet,” Lundgren said.

Producers doubted they would be given access to Japanese whaling boats, so they didn’t try. Makers of “Whale Wars” made no attempt to get the Japanese side of the story at all, Lundgren said. Foley said they didn’t have time.

While people at Animal Planet aren’t journalists, Boston University journalism professor Bob Zelnick said he’s always wary about projects that tell a story from only one point of view.

Both sides of the Antarctic confrontation have already found plenty to argue about. The Japanese claimed four people on whaling ships were hurt when Sea Shepherd volunteers began throwing the rancid butter; Sea Shepherd says it was just people throwing up from the smell. Sea Shepherd captain Paul Watson claimed the Japanese shot at him; the Japanese say they fired stun grenades that make noise but have no shrapnel.

The incident where two activists spent two days aboard a harpoon boat is also murky. The society initially claimed they were delivering a written protest to stop killing whales; they later said the men planted electronic bugs to help the group track the Japanese fleet. There were questions about whether the men were restrained while on the boat or not.

The Sea Shepherd Society has claimed victory on its mission, saying the Japanese didn’t kill nearly as many whales as they set out to.

While NYU’s Fagin didn’t find anything inherently wrong with Animal Planet’s participation, he said how the story is told is important.

“I hope the final product will attest to the subtleties of the issue and not simply present it as a morality tale with black hats and white hats,” Fagin said, “because the world is not as simple as that.”

Foley promised an approach “as even-handed as we can be.” He defended the decision to show only one side.

“I’m not sure we wanted to be telling the story of the Japanese whalers,” he said. “We wanted to go down there and tell the story of what motivates these people who are trying to stop the whaling.”