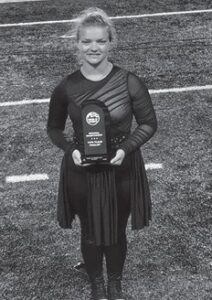 Katie Nottingham is drum major for the Beechwood Tiger Marching Band. She is the daughter of Scott and Anna Nottingham, and granddaughter of Rose Ballard.

Can you believe that fall is already here, although in this part of the Ohio Valley area for the past month you couldn’t tell the difference of what season. You needed heat in the morning, air condition in the afternoon.

As much as I dread these long months of cold winter, I wouldn’t change places to live in other states. I really do love the changing of the seasons, just dread the cold.

I got the propane tank filled up as I heard prices are supposed to escalate. It sure put a dent in my checking account.

Saturday, I ventured to Oxford Farmers Produce to enjoy music for a couple of hours. Warren and Judy Waldron along with Dale Farmer sure do a great job.

It is so relaxing to listen to them for a couple of hours Amy Coogan Clay had another event so she wasn’t able to attend.

Miami University held Parents Weekend and the produce place was so crowded with parents and students. The ones who run the market stayed open an extra half an hour.

Warren, Judy, Dale and Amy had another event to perform at so they had to leave early. I was invited, which I declined as I wasn’t feeling well.

September 17, Shawn Stamper and Sunrise Ridge performed at Mohican Bluegrass Festival in Glenmont, Ohio, which is a good distance from me, however I had planned on going. Then my cousin Gracie Wilder passed away, so plans were changed.

With much dismay I am sorry to report that Jack Adams will no longer be performing with Larry Efaw & Bluegrass Mountaineers. For as long as I have known Larry Efaw, which is over 20 years, Larry has had a number one band. Jack Adams way of picking the five string banjo fit Larry’s band more than anyone he has ever had in the band. It had nothing to do with Jack’s picking, just distance and traveling issues.

This was an opportunity that may not come Jack’s way again. Oh he may get other offers to perform in bands, but there’s only one Larry Efaw. I tried to tell Jack that he was going on a venture that he had never experienced before. At least he has traveled and has seen a lot of places.

I was hoping Larry would record a CD while Jack was performing with the Bluegrass Mountaineers. Maybe it will work out yet.

Blackey Days were canceled due to this pandemic, coronavirus, COVID or whatever else it is called. Please consider getting the vaccine. Maybe it will help to get back to a semi normal way of life.

For the past month or so my life has been turned upside down with events happening that affected me indirectly.

You know how much I love Johnny and Ann Calihan. Ann fell, breaking her femur in two places, had a short hospital stay, then had to be moved to rehab for therapy.

Meantime their daughter Carol took her last voyage. Johnny or Ann couldn’t be there.

Johnny has to have someone with him, so I helped the family as much as I could. Johnny developed pneumonia and spent several days in the hospital, which upset Ann, and couldn’t do therapy. Johnny was released too early, had a backset and had to be admitted to the hospital again.

Ann developed double pneumonia and congestive heart failure. She couldn’t do therapy because she was so ill. Since Ann couldn’t do therapy, her insurance kicked her out of rehab, and she had to pay out-of-pocket expenses of $400 per day to sit in a chair. It is ridiculous you pay insurance and have no say in anything.

Ann is home at the present time, and Johnny got released from the hospital. After almost a month apart they are finally together.

Ann Is really doing great with her physical therapy at home. When Johnny notices the therapist puts the belt around Ann in case she should fall, Johnny will tell the therapist to take that off because she can’t breathe.

My life has been so blessed to have Johnny and Ann a part of my life.

Since the elderly man I was cleaning for passed away, I made up my mind I am not working anymore. An offer of staying with someone came my way. I hated to say no, however that is exactly what I replied.

I don’t have pets to tie me down, and I rarely see my grandchildren. I don’t spend that much time with my son Keith Ballard, who lives with me. This is my time to do what I want. As long as I keep my spade in my car for protection, I don’t have to fear about traveling alone. I have a couple of trips I want to do before it gets winter.

There’s something that was in The Mountain Eagle that breaks my heart. I read where someone I’ve known many years has been accused of molesting a young girl. I can’t understand with as many women as there are, why does a creep want to fool with a young kid? I will never speak to this person if I ever have to come in contact with him. Believe me I’ve lost all respect.

I have also heard of a word that years ago I didn’t know what it meant, called incest, being used to describe people from the mountains. Well that just doesn’t happen in the mountains in today’s time. How can a woman be married to someone, that she knows definitely when an adult daughter needs money from her dad, all she has to do is have sex with him, and he gives her money?

Seems as if you can inherit a million dollars, however it is too bad you can’t inherit common sense.

The Beechwood Marching Tigers Band came in 12th place in competition in Toledo Ohio. Five states were represented. I wish I had been able to attend.

Sunday was Old Time Fiddlers meeting. We had eight musicians, and the music was wonderful as usual. The food was good. I made old-fashioned goulash,and it must have been good as I didn’t have any left to bring home.

Hello to Mike and Marcia Caudill. Sunday morning I made breakfast for Keith, biscuits, gravy, sausage, eggs and fried apples from your tree. I can pass on everything, however I did have fried apples and a tad bit of gravy.

October 7 is Ann Calihan’s birthday. I plan to fix Ann shucky beans, and she will know they are from you.

Hello Buddy and Bernice Grubb, I hope things are alright with you. Mike, it was such a pleasure talking to you. I feel as if I have gained a grandson with you.

Tommy Tindell, maybe i will see you before long.

Well once again time is catching up with me.