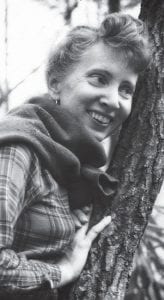 A memorial service will be held January 27 for Anne Robertson Frye Caudill, who was the widow, muse, secretary and partner of the late author Harry M. Caudill.

Mrs. Caudill was born March 6, 1924, in Cynthiana, the daughter of Kenneth C. Frye and Lois Ammerman Frye. She grew up partly in Cynthiana and partly on the family farm in Harrison County. After working briefly as a chemist with Standard Oil during World War II, she met her future husband at the University of Kentucky. They married in 1946 and she worked to establish the Home Demonstration Agency in Montgomery County while he was finishing law school.

The couple moved to his hometown, Whitesburg, where he practiced law until 1976 before teaching for a few years and establishing the Appalachian Studies program at the University of Kentucky. Besides assisting in the law practice, raising gardens and raising three children, she assisted in the writing of 10 books, the best known being “Night Comes to the Cumberlands”, hundreds of newspaper and magazine articles and speeches by her husband and preparation for television appearances.

She was especially proud of her work in the takeover of Miners Memorial Hospitals (later part of Appalachian Regional Hospitals) in eastern Kentucky by the Presbyterian Church, averting closure or severe curtailment of services, and in establishing the Letcher County Public Library, now the Harry M. Caudill Memorial Library. She had remained a benefactor of the library until her death.

In later years Mrs. Caudill moved to New Albany to be near her children and their families. She was an active member of the Daughters of the American Revolution, Thomas Jefferson Unitarian Church, the Sierra Club, The Nature Conservancy and numerous other organizations.

She was the subject of a semibiography by Terry Cummins, of New Albany, Ind., “The Caudills of the Cumberlands”, based on some of her oral stories, and a film, “Room To Fly”, by Lee Pennington and Jill Baker of Louisville. She also narrated a film, “Harry Caudill: A Man of Courage,” by Jerry Deaton of Frankfort.

Mrs. Caudill is survived by her children, James K. Caudill and wife Jane, of Louisville, Diana Grace and husband Jack, of New Albany, and Harry F. Caudill, of Lexington; grandchildren, Lee Grace of New Albany and Tiara Caudill of Lexington; and greatgrandsons, Hunter and Noah Grace and Benjamin “B.J.” Caudill.

She was preceded in death by her husband, her brother Robert Frye and her grandson Patrick Grace.

Memorial gifts may be made to the Letcher County Food Pantry or to any community food pantry.

A memorial service will be held at 1 p.m., Jan. 27, at Kraft Funeral Service, 708 E. Spring St. in New Albany, Ind., with visitation from 11 a.m. A reception will follow the memorial service at the funeral home.