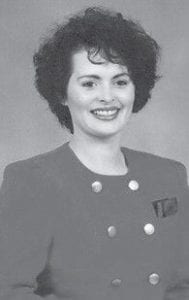 Annette Wright Tharp, 48, died February 7 at her home in Versailles.

Born in Perry County, she was a former resident of Whitesburg and was the daughter of Carolyn Howard Willard of Winchester, and Lentena Wright and wife Georgene of Dana. She was the granddaughter of the late George and Maxie Wright of Thornton, and the late Orville and Hester Jones of Whitesburg, and a sister of the late Edward Lynn Wright.

Mrs. Tharp was a member of the Tabernacle Baptist Church in Nicholasville, and was a volunteer foster parent for several years. While living in Whitesburg, she worked in the accounting offices at Dawahare’s and at WTCW radio station. After leaving Whitesburg she was in business as well as working at Toyota in Georgetown.

Funeral services were held Feb 11 in Versailles. Burial was in Sunset Memorial Gardens of Versailles.