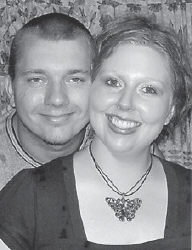 Jake and Selena Johnson celebrated their second wedding anniversary on July 22. He is the son of Jake and Zena Johnson of Burdine, and works for the Jenkins Independent School System. She is the daughter of Roger Johnson and Debbie Johnson, both of Jenkins, and works for Pikeville Medical Center.