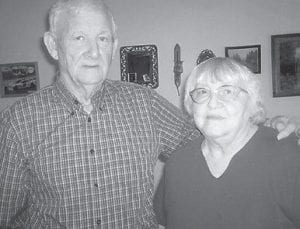 Clayton and Letha Ann Collins celebrated their 60th wedding anniversary at their home in Osgood, Ind. They were also honored at the Bethany Baptist Church by Pastor Mike Cammack and the Inspiration Faith Singers. The couple were married February 7, 1949 at Isom. He is the son of Byrd and Sadie Collins of Isom. She is the daughter of David and Cora Jarrett of Whitesburg. They are the parents of seven children, and have 18 grandchildren and five greatgrandchildren.