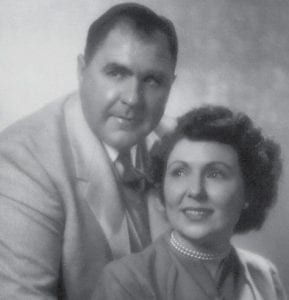 Mary and Eugene Shepherd of Partridge, recently celebrated their 60th wedding anniversary at a reception hosted by their family at Lake Cumberland State Resort Park in Jamestown. The Shepherds were married in Harlan on June 28, 1947 with his sister, Juanita Bledsoe, and her husband Rufus as their matron of honor and best man. Following the wedding, a reception and dinner was held at the home of her parents, Martha and Silas Caudill, on Mill Branch. Sixty years later, Juanita Bledsoe and many of the 70 guests at the anniversary celebration shared memories of the wedding and festivities in 1947. Pictured above are Mary Caudill and Eugene Shepherd at their wedding in Harlan in 1947. Below are Mr. and Mrs. Shepherd at their 60th wedding anniversary celebration. 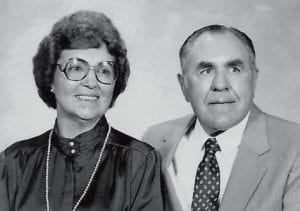