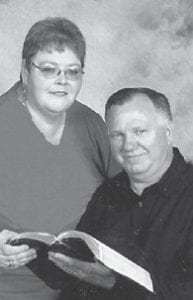 — Frank and Jeannie Adams of Premium celebrated their 34th wedding anniversary December 18. He is pastor of King’s Chapel Church at Whitco, and is a coal miner. The couple have two children, Janie Rogers of Richmond and B.J. Adams of Premium, and four grandchildren, Callie Rogers, 10; Lawson Rogers, 7; Kane Wampler, 9; and Gage Adams, 2.