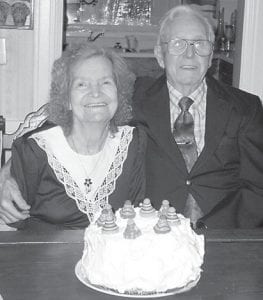 Along with a Christmas Eve celebration, the Collins family honored Orlando and Jackie Collins of Payne Gap, on their 66th wedding anniversary. The couple were married December 24, 1945 in Neon. They have nine children and a number of grandchildren and great-grandchildren. He is a veteran of World War II and served in the Pacific Theater .