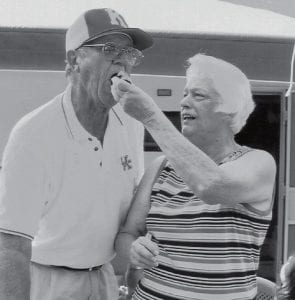 ANNIVERSARY – U.G. “Gene” and Betty Cureton Horn were surprised Sept. 1 by family and friends with a party celebrating the couple’s 50th wedding anniversary. The couple met as students at Eastern Kentucky University and were married Sept. 1, 1957 at the Seco Methodist Church. The Horns are retired employees of the Letcher County Board of Education. They were preparing for their usual pre-game tailgate party before the EKU-UK football game, when more than 30 family members and friends surprised them. Included was a “fly-over” with a banner saying, “Happy fiftieth anniversary to Gene and Betty Horn.” The couple are the parents of two sons, David Horn and wife Jody, and the late Gregory Horn. They also have a daughter-in-law, Valerie Horn, and four grandchildren, Kaitlyn Horn, Amy Horn, Callie Jane Horn, and James Grant Horn.