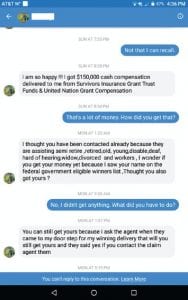 NEW SCAM SPOTTED – Another scam is making the rounds on Facebook Messenger, promising readers that they are eligible for a United Nations grant. The scam messages, which appear to be from someone on the user’s contact list, require the user to call a “claims agent” to collect an award. Persons snared in the scam in Canada sent more than $1,000 to the scammer for fake legal fees to collect the money, which never came.

Another Internet scam is making the rounds in Letcher County, this one claiming the recipient is eligible for thousands of dollars in grant funds from the United Nations.

The message appears to be from someone the recipient is already connected to on Messenger as a Facebook.

“i am so happy !!! I got $150,000 cash compensation delivered to me from Survivors Insurance Grant Trust Funds & United Nation Grant Compensation,” (sic) the Facebook Messenger message says.

Of course there are no such funds, but the sender tells recipients that not only did he receive $150,000 cash, it was delivered to his doorstep, and the people who brought it showed him a U.S .government list with the recipient’s name on it, and the recipient can get money, too, “if you contact the claim agent them.” (sic)

“ I thought you have been contacted already because they are assisting semi retire ,retired,old, young,disable,deaf, hard of hearing,widow,divorced and workers , I wonder if you get your money yet because I saw your name on the federal government eligible winners list ,Thought you also got yours ?” (sic) the message says.

When told that it appears to be a scam, the sender argues that it is not.

“Am not scammed because have already received my cash and bought a new ride out of the cash I received the rest of the cash is what you see on my fixed account because am planning to buy new house soon i see this as a Blessing from God,” (sic) the message says.

The message is accompanied by a picture of a car copied from a web site that sells window tinting, and a picture of a computer screen with the words “account balance USD 50,000.”

Letcher County Sheriff Danny Webb said he had not encountered that particular scam before, but scams are even more common this time of year because people are receiving tax refunds and swindlers are attempting to get their hands on the money.

“The first thing we tell people is if somebody asks you to go to Walmart and buy a (money) card and send it to them, it’s a scam. If somebody sends you a check and tells you to cash it and send some of the money back to them, it’s a scam,” Webb said. “If they call you, don’t give them any personal information whatsoever, and try to block the number.”

He said calls are sometimes difficult to block, because the scammers have equipment to allow them to change the number caller ID displays. Many scammers are using numbers that appear to be local. Webb said his own wife received a call from someone claiming to be from the sheriff ’s department and threatening her with a warrant if she didn’t send money.

The threat of a warrant or an arrest is a common scam in which a caller tells the mark that he or she can pay a fine and avoid being taken to jail. The person is then asked to wire money or send cash. Sometimes the caller pretends to be an Internal Revenue Service agent and claims the victim was send a tax refund that was too large and must send it back to avoid going to prison.

Another common scam is a notification that a person has won a lottery prize, usually foreign, when the person has never bought a ticket for that lottery. The catch is, the person has to send a handling fee or attorney fee first in order to get the money. Once the fee is sent, the person never hears from the “lottery” again.

“If you win the lottery, you’re not going to have to send them any money to get it,” Webb said.

The United Nations has posted a scam warning on its web site warning people about scams using the UN name. The organization does not give grants. Likewise, the IRS and Social Security Administration have issued scam warnings in the past.

The messages promising money from the “Survivors Insurance Grant Trust Funds & United Nation Grant Compensation” have been active since at least 2015. Similar messages were being sent to Canadian residents then, and an investigation traced them back as far as Centerville, Texas. Several other recent scams have been traced to Texas. From there, they disappear into other countries such as Nigeria.

The Kentucky Attorney General’s office warns not to open suspicious messages, and not to click on links or photos within messages. Malware can be hidden inside the code for photographs, causing computers to become infected with ransomware or other malicious files.