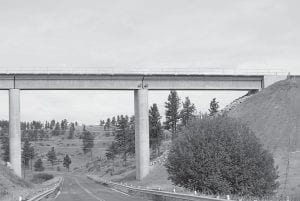 In a scene reminiscent of one in Letcher County a little more than a year ago, two young goats wandered onto the thin ledge of a railroad bridge and spent nearly two days high above the ground until rescuers in a towering cherry picker plucked them from their perch, hungry but safe.

The rescue occurred Sept. 1, 60 feet above a little-trafficked rural roadway in southern Montana between Billings and Roundup, after a caller told the Rimrock Humane Society the goats were stranded on the 6-inch ledge.

The young female animals weighing 25 and 35 pounds mostly stayed on the angled ledge, even though there was a wider surface area on a pillar just a few feet away.

“The whole time, we thought they were going to fall off ,” said Sandy Church, humane society president. “These guys are just babies.”

Church said it wasn’t clear how the nimble-footed animals got into the predicament, but she speculated they wandered onto the ledge at night then froze after the sun rose and they discovered where they were. 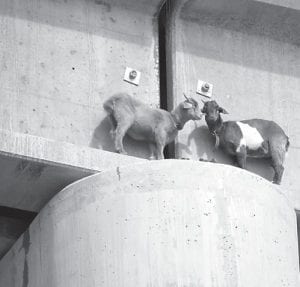 In this photo taken Sept. 1, two goats, center right, are stranded on the ledge of a railroad bridge south of Roundup, Mont. The goats were rescued after nearly two days and are in good condition. The rescue was similar to one in Letcher County in 2009. (AP Photo/Courtesy of Sandy Church of the Rimrock Humane Society)

The goats sometimes stepped to the pillar to urinate then returned to the narrower ledge, where they tried to rest their tired legs by tucking them under their bodies for a few seconds, she said.

Authorities were called Aug. 31, when the goats were first spotted. But confusion about the location delayed the rescue until another caller alerted the humane society on Sept. 1 along with the Musselshell County sheriff ’s office.

The sheriff ’s office, Church and Cory Freeman, a humane society volunteer who runs the Animal Edventures Sanctuary, enlisted the help of officials at Signal Peak Energy, which operates a nearby coal mine.

Mine boss John DeMichiei volunteered mining equipment with an arm high enough to reach the stranded goats that eventually moved to the pillar.

“We thought they were going to panic, but it was just the opposite,” said Church, who videotaped the five-minute rescue.

The rescue went smoothly, and the goats appeared to be in good condition at Freeman’s animal sanctuary.

The goats had collars around their necks, and Church and Freeman were searching for the owner. Church hoped the animals weren’t abandoned. But if they were, she already has talked to people off ering to adopt them.

“Everybody loves an animal with a story,” Church said.

A similar story happened at Roxana on July 27, 2009 when employees at an Enterprise Mining Company preparation plant were able to rescue a Boer goat which had been stranded on a highwall about 45 feet from the ground for about a month.

That rescue was organized by prep plant superintendent Jeff Mullins, who first spotted the goat on June 28. After using a pulley system to get food to the goat for several days, prep plant employees were eventually able to get the goat to walk into a cage that was baited with food.