Another injured bird is rescued 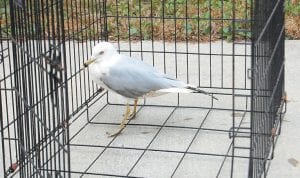 Almost a month after an injured bald eagle was cared for and set free by members of the 4-H raptor rehabilitation program at the Letcher County Extension Office, a coastal bird has found its way into the rehab program.

A Herring Gull was found injured in Pikeville Feb. 22 and Mitch Whitaker, a master falconer and maintenance supervisor at the extension office, decided the bird, which is about the size of a duck, would be a good candidate to live at the rehab center in Whitesburg.

The Herring Gull had an injured wing, which was amputated on Feb. 24 by Dr. Gene Smith of the Appalachian Animal Hospital in Hazard.

“Other than that it is in good shape,” said Whitaker. “It’s a feisty thing. He’s strong.”

Since the bird can no longer fly, Whitaker and his crew have committed to feeding and caring for the Herring Gull for the rest of its life.

“It couldn’t survive on its own,” said Whitaker. “It’s another one of those situations where we decided to keep it. It’s like a little zoo up here.” 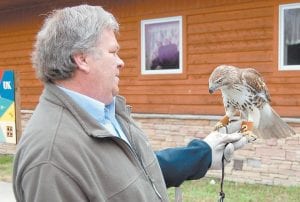 This young male hawk has a lot of feather damage to one of its wings but Master Falconer Mitch Whitaker, of Roxana, thinks the bird will be able to be released back into the wild come this fall. The hawk is being cared for at the 4-H raptor rehabilitation program at the Letcher County Extension Office.

Whitaker is going to provide a small pool of water for the coastal bird, which has webbed feet

Whitaker doesn’t have an answer for why the Herring Gull was in eastern Kentucky.

The center also recently obtained a second redtailed hawk, which has a lot of feather damage to a wing. This one is a juvenile male found injured in Paintsville. Whitaker estimates the hawk to be about a year old. His tail feathers are brown.

Whitaker is hopeful the hawk will be able to be released back into the wild this coming fall and has started a training process to rehabilitate the feathers. He hopes to release the hawk from the 50- yard line at the Letcher County Central High School football field so high school students could watch the event.

The other bird being cared for as part of the raptor rehabilitation program is a female red-tailed hawk which was found this past December at Sandlick severely injured. The extension office held a contest to name the hawk and Kristi Skeens, of Whitesburg, named the hawk Journey.