ANOTHER WEEK, ANOTHER BUS 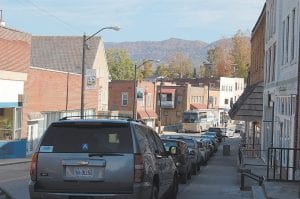 A bus carrying U.S. Senate candidate Alison Lundergan Grimes and members of her team rolled into Whitesburg Monday afternoon where they were greeted by a crowd of about 80 supporters. The visit by Grimes came almost exactly one week after incumbent Senator Mitch McConnell visited. Both have been in Letcher County twice this year. (Photo by Sally Barto)