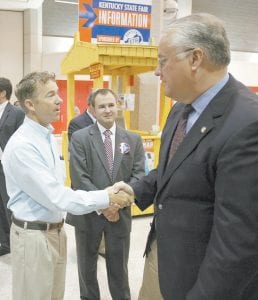 The Kentucky Narcotic Officers’ Association said on its website Tuesday that Paul’s campaign failed to respond to a trio of questions the group submitted on Aug. 13. The group said Democrat Jack Conway responded within days to the queries seeking the candidates’ positions on drug decriminalization and federal funding for drug enforcement in Kentucky.

“We’re trying to be fair to both candidates,” Tommy Loving, the group’s executive director, said in a phone interview Tuesday. “It would appear we’ve been blown off at this point” by the Paul campaign.

“I find it disappointing that his campaign didn’t take the time to respond to our three very legitimate questions.”

The group, which represents more than 300 drug enforcement officers, has a policy of not endorsing political candidates, Loving said. The questionnaire was meant to off er information on where the candidates stand on key issues to help the group’s members decide who to support in the election, he said.

Paul campaign manager Jesse Benton said the campaign will submit Paul’s responses within the next day or two.

Anti-drug policy has emerged as a focal point in the Senate campaign since Paul suggested drug abuse isn’t “a real pressing issue” — which drew withering criticism from Conway, the state’s attorney general. Paul has since said he’s concerned about drug abuse and is fully aware of Kentucky’s drug problems.

Paul, a tea party favorite who advocates a more limited federal government, has said he prefers local initiatives over federally based responses to drug problems.

Loving said the group set a Sept. 1 deadline for the candidates to respond to the questionnaire.

Conway portrayed himself as tough on crime in his first ad of the fall campaign. Conway supports a strong federal role in helping state and local authorities combat drug trafficking and abuse. He has praised Operation UNITE, a federal initiative providing undercover narcotics investigations and addiction treatment. The state puts up about $2 million and the federal share of $4.3 million comes mostly from federal earmarks. Paul has pledged not to request earmarks.

With drug enforcement escalating as a campaign issue, the group decided it was appropriate to quiz the two candidates about their views on federal support for anti-drug initiatives, Loving said.

“We really don’t like to be involved in politics, but when it concerns the funding to do our job, that’s concerning,” Loving said.

Without federal support, some smaller anti-drug task forces would “go out of business,” he said. Lack of federal money would be a “major blow” to larger police efforts to combat illegal drugs, he said.