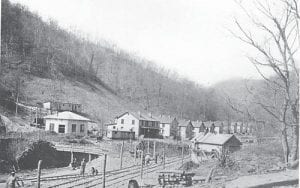 The coal camp community of Hemphill, offically known as Jackhorn, was still under construction when this photo was taken in 1914. A new study says Hemphill is one of two Letcher County communities and 50 in Central Appalachia that are “at risk” because of mountaintop removal mining. A coal industry spokesman dismissed the claim by North Carolina-based Appalachian Voices as a “ruse.”

An environmental group this week released a report in which it claims that two Letcher County communities are among 50 places in Kentucky, Virginia and West Virginia that are “at risk” from the practice of mountaintop removal mining.

A spokesman for the coal idustry said Tuesday the report is a “ruse.”

While very few actual mountaintop mining permits have been issued for Letcher County by state mine regulators, the nonprofit organization Appalachian Voices says that at least two such surface mines threaten the unincorporated communities of Hemphill, which lies in the upper regions of the North Fork of the Kentucky River valley, and Oven Fork, located near the headwaters of the Poor Fork of the Cumberland River.

The North Carolinabased organization doesn’t list the holders of the mining permits or whether the mines remain open in 2015. Its mapping study, “Communities at Risk,” says that 8.65 percent of the area within a one-mile radius of Hemphill, “was actively being strip mined” in 2014, and that “mountaintop removal coal mining occurs within 429 feet of the community.”

The mapping study also says that 8.84 percent of the area within a one-mile radius of Oven Fork was actively being mined in 2014, and that mountaintop removal occurs within 708 feet of the community.

The study says that Hemphill is the 33rd most “at risk” community in the three-state mining region, while Oven Fork is the 45th most “at risk.”

In a press release issued Tuesday, Appalachian Voices says its “new interactive map shows that mountaintop removal coal mining has been expanding closer to communities in Central Appalachia in recent years, posing increasing threats to human health and the environment even as coal production in the region has declined dramatically.”

• While Southwest Virginia has a disproportionate concentration of at-risk communities on the list (20%), it accounted for only 8% of Central Appalachia’s surface mine coal production in 2014; and

• West Virginia, where 60% of all Central Appalachian surface mine coal production occurred in 11 counties in 2014, accounted for nearly half of the 50 at-risk communities.

The organization says that much of the expanding surface mining is for metallurgical coal used to make steel, as opposed to thermal coal used in power plants. Metallurgical coal is usually exported overseas, says Matt Wasson, Appalachian Voices Program Director who developed the methodology for the web tool.

In a “white paper” accompanying the mapping study, the organization, one of several environmental groups that have called on the federal government to outlaw the practice of mountaintop removal, acknowledges that it is trying to bring the issue back to the attention of regulators and news organizations after it lost steam with the steep production declines and catastrophic job losses suffered in the coal industry since 2012.

“Coal company bankruptcies, mine layoffs and steep declines in coal production have been the dominant national news stories out of the Appalachian coal mining region since 2012,” the study says. “… The near-complete displacement of one news story by the other could leave the impression that the problems of mountaintop removal have largely been resolved by the collapse in demand for Appalachian coal — the more so when one learns that production from Appalachian mountaintop removal mines specifically has declined by nearly 60 percent since its peak in 2008.”

“It should be good to live close to a mining operation because it means there’s employment there,” Raney said. “This group has done nothing but drive employment out of the areas they’re talking about and shut the employment opportunities down. It’s enormously hypocritical of them to point fingers.”

Hemphill is located one mile north of Neon and 8-1/2 miles of Whitesburg, and it located at the mouth of Quillen Fork and Yonts Fork, both tributaries to the North Fork of the Kentucky River.

Hemphill has been officially known as Jackhorn since a post office was established there in November 1916. In 1914, the Hemphill coal camp was built by Elkhorn Coal Co. and named in honor Alexander Julian Hemphill (1856-1920) of Hemphill and Associates, the Wall Street firm that financed the Elkhorn operations.

Oven Fork is located about 4-1/2 miles from Whitesburg on the South side of Pine Mountain. According to the book Kentucky Place Names, the community was settled before 1800 by the Bach family and others from Thuringia, Germany. Kentucky Place Names said the community may have gotten it name from open ovens the German settlers used to bake bread, but that the name was most likely applied to the Poor Fork tributary now known as Frank’s Creek.