Apartments for seniors to open soon 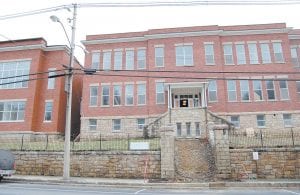 Work continues on the new Jenkins School Apartments, which will open soon in the old Jenkins High School building on Main Street in Jenkins. The building will contain apartments for senior citizens, a senior citizens center and a studio for Letcher County’s governmentoperated television channel. Completion date is projected to be late January. (All photos by Sally Barto)

Senior citizens in Letcher County will soon be given the opportunity to move into new apartments in the same building in which some of them once attended school.

The 101-year-old building that once housed Jenkins High School is being converted into senior apartments but is maintaining many of the features that have made it such a beloved structure to many.

“People who are familiar with the building will recognize everything,” said Johan Graham, director of development for AU Associates Inc., the Lexington firm developing the old school into affordable housing for seniors. “They could pick out their original teachers’ classrooms.”

The building’s new design was based on the existing layout of the old school, which resulted in eight different floor plans for the building’s 26 apartment units. 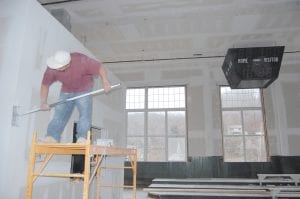 Freddy Hernandez, an employee with Bob Madison Drywall of Nicholasville, finished a wall for painting last month in the new space for the Jenkins Senior Citizens Center. Parts of the old Jenkins High School Gymnasium including the scoreboard, floor and bleachers will stay. AU Associates is transforming the old gym into a state of the art kitchen for the senior citizens center as well as a large meeting room and a studio for Letcher County’s government-operated television channel.

Original building materials that remained in good condition — including American chestnut wainscot and trimming — have been restored, Graham said, and are an integral part of the transformation. The old scoreboard in the gym has been left intact, as has the old archway in the basement.

The building, located on Main Street, is being remodeled under a plan designed to restore the structure in a way that keeps it in as much of its original state as possible.

“It’s both financially important and mission important to protect these assets and make them useful for the next 100 years,” said Graham.

AU Associates, which has preserved more than 20,000 units of housing nationwide, entered into a 50-year lease agreement last February with the building’s owner, Letcher Fiscal Court, to preserve and use the old high school for senior housing. Construction began in mid-March and is expected to be complete by the end of this month. 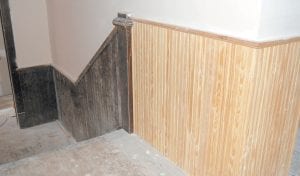 Much of the old American chestnut that lined hallways in the former high school will stay on the wall. That which couldn’t be salvaged is being replaced with new wood, all of which will be painted to look the same.

In addition to the 26 one- and two-bedroom apartments, the building will house the Jenkins Senior Citizens Center and a television studio for the “government channel” that is operated by the Letcher Fiscal Court. Total renovation costs are estimated to reach $3.1 million, Graham said.

Apartments, a mechanical room and a laundry room are located in the basement. The old gymnasium/auditorium area will house the senior citizens center, which will include a state-of-the art commercial kitchen installed by AU. The studio for channel 98 is located on the old stage. A large glass wall separates the TV studio from the senior citizens center. Apartments are also located on the third, fourth and fifth levels. 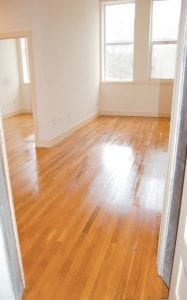 AU Associates tried to preserve as much as possible of the original contents of the old Jenkins High School building. In this unit, original hardwood floors were restored.

A new plumbing system and roof are a part of the renovation as well. The exterior of the building has been cleaned and a new entrance is being added to the back of the building. A part-time building manager and part-time maintenance director hired by AU Associates will work at the building about 30 hours a week.

Letcher County Judge/ Executive Jim Ward contacted AU Associates to ask about renovating the building after learning the company had completed a similar preservation project in Jackson County. Ward hoped that AU Associates would agree to transform at least one of the old schools now owned by the county into affordable housing. The Jenkins project was chosen over the old Kingdom Come and Campbell’s Branch elementary schools, partly because of its location. 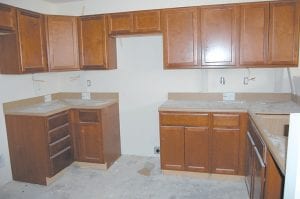 The kitchens in each of the 26 apartments will include plenty of cabinets and counter space.

“It’s really convenient,” Graham said. “All the shopping and churches in Jenkins are here.” City hall, two banks, medical facilities and restaurants are within walking distance of the building.

“I think we’ll be ready to move people in by the end of January,” said Graham. “We are taking applications now.”

The company received 12 preapplications in December. The head of the household must be 55 or older to lease one of the units.

Two units are fully handicapaccessible and the others can be modified. One unit has strobe light signalers for the hearing impaired.

AU Associates is building a twounit townhouse next to the old school. A similar townhouse will be built in the Mud Town section of Jenkins.

The county government bought the old high school from the Jenkins Independent School District in the late 1970s and spent $1.6 million on the building in coal severance tax funding from June 29, 2000 to July 31, 2008, the majority of it allotted when former Gov. Paul Patton was in office. The funds were used to purchase a roof, windows and elevator. Mold and asbestos was removed from the basement. Three porches were repaired and one was entirely replaced. Drainage work was done to the back of the building and heating and cooling units were repaired.

A group of community members had been working to save the old high school building from being torn down since 1992. The Old Jenkins Renovation Committee was formed in the late 1990s and included D. Charles Dixon, Ked Sanders, Rosemary Shook, Betty Hunsaker, Peggy Greer, Paul Thomas Greer, Jimmy Polly and Pelma Dixon. The committee raised more $30,000 trying to save the building.

The middle portion of the building, which contains the gym, auditorium and classrooms underneath the gym, was completed in 1912. The left hand side toward Burdine was finished in 1924. The right side of the building positioned near Jenkins Methodist Church was built in 1923. The school began as a grade school and a high school was added in 1917. The first graduating class was recognized in 1923. Five seniors were in that class.

The old building held its last classes in fall 1971. The school began holding classes in its current location in January 1972. The Jenkins school board owned the old high school building until 1977, when the fiscal court bought the building. The school board kept its offices in the building until the 1980s, when the county had to pay the board’s costs associated with moving its offices to what is now Jenkins City Hall.

Jenkins Head Start was located in the portion under the gym until the early 1990s. The senior citizens center continued to operate out of the old high school building until the beginning of 2013 when renovations began.

Persons interested in leasing the apartments may call 859-233- 2009 or e-mail Jenkins@auassociates.com. An open house is scheduled for Thursday (Jan. 9) from noon until 4 p.m.