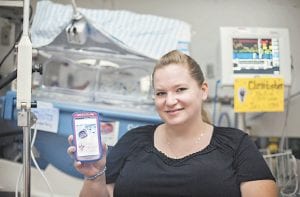 Sarah Keiderling of Bowling Green holds her mobile phone that has an app that allows her to watch her premature 3-week-old son Christopher in live time from anywhere. (Photo by Miranda Pederson/Daily News)

Christopher Keiderling was born July 1 and already has his own paparazzi.

The Bowling Green baby is one of the first infants being viewed on The Medical Center’s NICVIEW, a camera system that streams videos from a camera mounted on the baby’s bed or incubator in the Neonatal Intensive Care Unit. The Medical Center is the first Kentucky hospital to have the technology.

“It’s great. I’ve been getting a lot of feedback from the parents. Some babies stay in the NICU for a long time,” neonatologist Dr. Aspasia Fissikoudi said. “It helps them to be able to see the babies as often as possible. It gives them a sense of relief to see their babies. It’s a way for the families to stay connected. It’s a priceless feeling.”

There are 10 cameras mainly used for the NICU, but some are used in cases such as when a father is in the military and stationed overseas.

“These moms can’t be here 24/7. Their friends and relatives can’t all be here,” said Caitlin Burklow, director of Women’s Services for The Medical Center. “The moms are missing out on that bonding time. We’re very fortunate our administration wanted to support this and thought this was important.”

The NICVIEW alleviates some of the anxiousness of being away from the baby. There is no extra charge for the service. Parents are given a secure username and password that they can share with anyone they want to see the baby. The staff can also post notes in the secure online portal to share information with parents about the baby’s activities.

“The cameras are kept on except when our hands are on the baby for care activity,” Burklow said. “Moms can call and have the camera turned off.”

Sarah Keiderling, Christopher’s mother, said she and her husband, Chris, like to keep it on as much as possible so they can check on the baby. While she was in the NICU with her son recently, she held out her cellphone to show the view she has of him in his incubator.

“I absolutely love it,” said Keidlerling, who gave birth at 28 weeks into the normal 40 weeks of pregnancy. “It’s been great since I haven’t been able to be here as often.”

She was asked if she wanted to use the system a couple of days after she gave birth to her 3-pound, 2.1-ounce baby.

“It was a huge blessing. (I check it) quite often, especially when I’m not here,” Keiderling said. “It’s quite reassuring to know that I can look and say, ‘Oh, there he is right there.’ ”

Her family feels the same way. She has people from Ohio, California, Oregon, Massachusetts and Tennessee who check on the baby. Burklow said that isn’t unusual. Since the system was set up, there have been 1,744 views from more than six countries and 25 states.

“It’s pretty neat to see how far-reaching it is,” she said.

Burklow hasn’t noticed any lessening of the number of parents who visit the NICU, though.

“ They’re still coming,” she said. “We want to encourage that.”