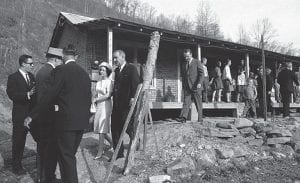 In April 1964, President Lyndon B. Johnson and his wife leave the home of Tom Fletcher, father of eight, who told Johnson he had been out of work for nearly two years in the community of Inez in Martin County, Ky. (AP Photo)

The agency created five decades ago to fight poverty in Appalachia has helped county economies grow with nearly $4 billion in spending, but the region still lags in key measures of educational, economic and physical well-being, according to a new study.

The exhaustive report ordered up by the Appalachian Regional Commission cites progress in some categories — poverty rates have fallen by about half, for instance — though the research didn’t quantify the ARC’s impact on many of the individual demographic trends. And researchers noted that other problems persist, including disproportionately high mortality rates and dependency on government checks.

The commission’s leaders acknowledge that even after half a century, the need for aid is as great as ever, a sentiment echoed by heads of charities in the region.

“We have serious work to do,” Earl Gohl, the commission’s federal cochair, said in a phone interview with The Associated Press. “The report is more about helping us and helping our partners look at the future and understand what we’ve accomplished and what we’ve not accomplished, and we work from there. So it doesn’t do agencies any good to be self-promoters.”

The report was presented to the re- gion’s governors in Washington earlier this week. It now appears on the ARC’s website.

Researchers from West Virginia University and a D.C.-area consultancy analyzed demographic data dating back to 1965, when President Lyndon Johnson signed a federal law creating the commission as a state-federal partnership. The agency’s sprawling 420-county territory includes 25 million residents and pieces of 12 states stretching from New York to Mississippi.

The question of how much Appalachian residents have caught up financially yielded a complicated answer. The authors found the region narrowed the gap slightly in per capita income, for example. But that’s at least partly because safety net programs such as social security and unemployment make up about 24 percent of personal income in the region, compared to 17 nationally.

While infant mortality rate for the region has dropped significantly, mortality rates overall are close to where they were at the end of the 1960s, even though they’ve dropped for the U.S. as a whole. The report cites higher rates of obesity and diabetes in Appalachia as possible contributors.

The report’s authors estimate that more jobs were created by the ARC in its early years when it received higher funding from the government. The commission’s funding level dropped significantly in the 1980s and hasn’t returned to where it was in the 1970s, when measured in inflation-adjusted dollars.

“And it’s now I would say a leaner commission that focuses on developing strategic partnerships.”

In 50 years, the commission has invested an inflation adjusted $3.8 billion in non-highway projects, which has drawn more than twice that in state, local and federal matching funds.

The founder of a charity that provides free clinics in Appalachia and elsewhere, Stan Brock of Remote Area Medical, lamented the lack of progress on public health in the 30 years he’s worked in the region. Brock, who was interviewed before the report’s release, said he’s met with the ARC in Washington and is familiar with their work in the region, but he doesn’t work directly with them.

He said that despite President Barack Obama’s Affordable Care Act and state-level efforts to expand Medicaid, many people still fall through the cracks or can’t find doctors who take government insurance such as Medicaid.

Among Remote Area Medical’s largest events is a clinic in Wise County, Virginia, that draws about 3,000 people each summer. Many patients tell Brock it’s the only time they see a doctor each year.

“ We are their single source of health care it seems, and that’s not right,” he said.

Other charity workers said statistics don’t do a good job of capturing some aspects of poverty in the mountains — such as homelessness — which isn’t mentioned anywhere in the 180-page ARC report. People sleep on relatives’ couches or in their cars in the winter and pitch tents on public land when it’s warmer.

“ Most people don’t understand that there are homeless people here because you will not see people out on the sidewalk asking for money, or begging for anything with signs up,” said Christina Smith of Jackson Neighbors in Need, an organization in western North Carolina that helps the homeless.

“A lot of people in the mountains are very proud people. They have a hard time asking for help when they need help.”