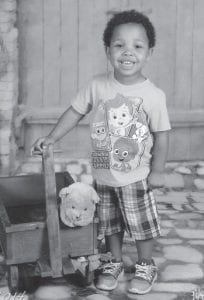 Elijah Grant Gordon is the son of Juddy and Mica Watts Gordon of Shelbyville. His grandparents are Mike and Donna Watts of Millstone. He is three years old.

Belated happy Mother’s Day to everyone! With everything happening, I forgot what day it was!

I spent the weekend volunteering at the Appalachian Festival. This is my second year doing this, although I have been going there on Mother’s Day for several years.

The music is always really great, and quite a few bands are friends and favorites of mine. Rabbit Hash String Band with Warren and Judy Waldron performed Friday.

Saturday, Tony Hale and Blackwater opened. This band always does such a great job.

Sunday, Ma Crow & The Lady Slippers performed, and as usual you can count on some great entertainment with this group.

All the bands were good. I just highlighted my favorites.

Later as I was talking to Ma Crow, I told her about Jerry’s sudden death. I was in for a surprise, as she said she was in Whitesburg last Sunday. Ma said as she drove through Whitesburg, and there was a funeral. It sure is a small world

Ma stopped by the WMMT at Appalshop, as she was going to drop off a CD, but she said it was locked up tight as could be.

I wish Gary Eldridge of RR2 Bluegrass Band would get in touch with Ron, as he would like to talk to him. Ron was very impressed with Gary’s singing and mandolin player when he was at Itchin’ to Pick in Louisville a couple of months ago.

I understand that Gary also made a great impression when he performed at MAC center in Prestonsburg several months back.

RR2 Bluegrass Band performed at The Tornado Twins Benefit at Manchester Fire Department, May 4, along with several bands. This was a huge success

I missed this event. These two-year-old twins were friends of my greatgrandchildren.

Les and Pat Wagner spent some time once again in the mountains visiting family, and their Aunt Ethel isn’t doing very well. Please keep the family in your prayers.

Maybe sometime I will be in the mountains the same time as Les and Pat, and Larry and Becky Hasty.

Doyle and Betty Ison, I will be stopping by before long as it is going to be winter again very soon

Hello Carrie Bates, thank you for being so good to Jerry.

Becham Bates, I am sorry I didn’t get to speak to you.

P.S. Hello Oma Hatton. I hope you had a very special Mother’s Day.