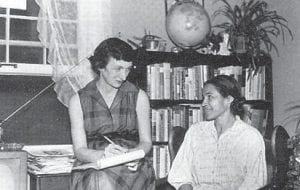 Braden has never been a celebrity. The majority of Kentuckians under 45 have never even heard of her. Yet in his 1963 “Letter from Birmingham Jail,” Dr. Martin Luther King, Jr. named Anne Braden as one of only five white Southerners he could rely on as an ally.

Appalshop filmmakers Mimi Pickering and Anne Lewis began the film in collaboration with Braden, who passed away in 2006. The film is a first person documentary exploring the life and legacy of this extraordinary American civil rights leader. When charged with sedition for attempting to desegregate a Louisville neighborhood in 1954, Braden was declared “a traitor to her race.” Rather than retreat from her principles, Braden choose to use these attacks to embark upon a lifetime of racial justice organizing matched by few whites in American history. Ostracized as a “red” in Louisville and throughout the South, she fought for an inclusive movement community and demonstrated that civil liberties were essential for civil rights. After decades of being shunned by even the most progressive organizations, in 1989 Anne Braden was awarded the first Roger Baldwin Medal of Liberty from the American Civil Liberties Union as a “lifelong leader of the movements for racial justice, labor rights, and peace in the South.”

In 2004, Lewis and Pickering approached Braden about telling her story on film. Reluctantly she agreed. As she says in the film: “They’re doing this documentary on me, which embarrasses me highly. But really what they’re trying to do is look at the movements that I’ve been a part of for the last fifty years through the lens of my life. And I know enough about the way people respond now that I know that is valid, if it just weren’t me.”

Lewis and Pickering filmed the 80 year- old Braden whenever possible – organizing, teaching, rallying for peace and justice, remembering, and reflecting. The filmmakers were aided by a team of advisors headed by University of Louisville professor Catherine Fosl whose biography Subversive Southerner: Anne Braden and the Struggle for Racial Justice in the Cold War South provided essential historical material and insights. Braden’s friends and colleagues from around the country agreed to sit down for extensive interviews. When Braden died suddenly in March 2006 the film was still in production. After years of raising funds to cover finishing costs, Lewis and Pickering completed the 77-minute film in spring 2012.