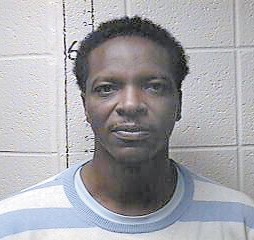 SHOOTING SUSPECT Alfred White, of Jonesboro, Ga., is being held without bond in the Letcher County Jail.

What was initially reported to police as an accidental shooting inside a Jenkins home has transpired into a murder investigation centered around two Georgia men police say were in Letcher County taking part in “illegal activity involving drugs.”

The shooting death of Walter Johnson Jr., 39, of Atlanta, was reported to Kentucky State Police as an accidental shooting about 1:14 p.m. on March 24. Police later charged Alfred White, 43, of Jonesboro, Ga., with murder and possession of a handgun by a convicted felon in connection with Johnson’s death.

Johnson was shot one time in the back inside a double-wide trailer located at 936 Premier Subdivision in Jenkins, a site formerly occupied by the old Mimosa Mobile Home Park. Sources close to the case say the home is occupied by David Michael White. White apparently inherited the home from his late mother, Lily White. Three other persons were inside the home at the time of the shooting.

KSP Detective Randy Combs said Alfred White and Johnson were friends who traveled together and had spent the previous night in the home.

“Basically they were here involving illegal activity involving drugs,” said Combs, who declined to specify what kind of illegal substance is involved.

Combs said Alfred White and Johnson had an argument earlier that morning, but said the argument wasn’t going on at the exact time of the shooting. A handgun apparently used in the shooting was found hidden inside the home.

A preliminary hearing for Alfred White is set for 1 p.m. on April 1 in Letcher District Court. He was ordered held without bond in the Letcher County Jail.

Last week wasn’t the first time Alfred White had been charged with a crime in Letcher County.

On Sept. 23, 2009, White was accused of forging a $497.35 check at Food City in Whitesburg after presenting a fake Kentucky driver’s license and a fake Social Security card under the name of Jamar Brown. White was charged with first-degree criminal possession of a forged instrument, two counts of seconddegree criminal possession of a forged instrument, and theft by deception, but the case was dismissed on Nov. 9, 2010 after White had been held for 60 days without an indictment being returned against him.

The murder case is still under investigation by Det. Combs.