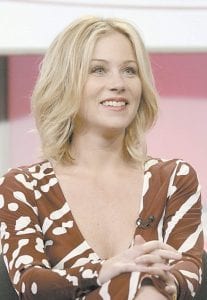 Actress Christina Applegate stars in “Samantha Who?,” which is back on ABC with fresh episodes for several weeks in a row. (AP Photo/Nick Ut)

Christina Applegate has a couple of pieces of show-biz advice.

One more thing: When you want to convey innocence and adorableness, think curls.

Seems like her ABC comedy “Samantha Who?” is putting such tips to good use. It’s different and it’s funny, full of energy that seems unleashed, not forced.

Debuting last October, it focuses on a young career woman who awakens from an eightday coma remembering nothing about who she was before. Clue by clue, Samantha begins to form a picture of herself and realizes that, in her old life, she was selfish, conniving and mean-spirited. She vows to be a better Sam in the future.

“Samantha Who?” marked the return to TV of its star (who in 1987 helped establish the upstart Fox network as ditzy teenager Kelly on “Married … with Children”). Even so, it arrived without the anticipative clatter raised by other fall newcomers like “Bionic Woman” and “Cavemen.”

Then it worked its charm on viewers and broke out as a hot new show.

Then the writers strike brought everything to a halt.

Now “Samantha Who?” is back with fresh episodes for several weeks straight (Mondays at 9:30 EDT). Applegate sees this as her show’s big chance to penetrate the audience’s consciousness again – and stay there this time.

Meanwhile, it’s poised to prove itself to any skeptics left as more than a sitcom about extreme forgetfulness.

“I was always taken aback by people who wondered how far can we go with this gimmick,” says Applegate. “We always knew that it was not gonna be an ‘amnesia show.’ Every series has to start somewhere, every show starts with a concept. But after the third episode, we hardly mention amnesia.

“It’s a show about a woman figuring out who she is.”

Who am I? How receptive am I to midcourse corrections? Those are pretty heavy issues for a weekly comedy to dwell on. But “Samantha Who?” keeps it lighthearted.

“I really want to change,” Samantha blurts out to a gathering of strangers. “But maybe I can’t. You know: ‘I yam what I yam.’ Popeye. THAT I remember.

“I just want to make good choices,” she adds yearningly.

“Sam is largely unformed and experiencing firsts, one after another,” says Applegate. “I love that about this character.”

Meeting with a reporter a few days ago, the 36-year-old Applegate mostly speaks in emphatic undertones. No jabbering. No zaniness. And no curls. No mistaking her for Sam.

Far less likely, of course, would be confusing her with Kelly Bundy. But after 11 seasons, and 259 syndicated episodes re-airing ever since, the unabashedly raunchy “Married … with Children” retains a prominent place among Applegate’s credits.

“Doing that show was a good thing,” she declares. “Living in full abandon as that character – it was a great training ground. I don’t need to ever get away from her.”

After that series she landed the title role of an NBC sitcom, “Jesse,” where she played a bona fide adult: a single mother.

But success for “Jesse,” she says, “just wasn’t in the cards.” Premiering in September 1998, it lasted just a season and a half. “And that’s completely OK with me. I have to believe that everything happens for a reason. Otherwise, you’re just dealing with disappointment all the time.”

If she’s right, there surely was a cosmic rationale for all the problems plaguing the 2005 revival of “Sweet Charity.” She broke her foot while on tour, then, after nearly forfeiting this precious starring role, made her Broadway premiere obliged to dance “on the inside of my foot,” she recalls.

She gestures in the general direction of Central Park. She not only aims to return to the stage, but dreams of performing Shakespeare in the Park. “So I’m putting that dream out there in the universe,” she says with a smile.

In preparation for a possible actors strike this summer, she and the show will be back in production in May to shoot five episodes for next season.

“Then we take off until September,” she sighs. “Then, maybe we’ll start to have a normal schedule.”

During the lunchtime interview, she treats herself to a glass of champagne. But still, she seems a little restless. She’s eager to get back to the show, where she’s having a blast doing what she loves.

“I’m really grateful that acting is the job that was chosen for me,” she says. “I get really lost when I’m not working. I don’t know what I’m supposed to do with myself. Thank God for dance class and The New York Times crossword puzzle and ‘American Idol.’ But acting is what I really have to do.”