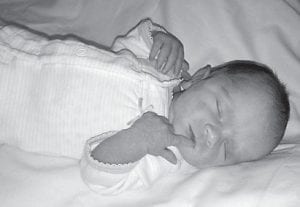 Makinley Faith Cornett-Adams was born April 17 to Jasmine Cornett of Whitesburg and Robert Adams of Mayking. She is the granddaughter of Robert and Ashley Cornett, the late Rhonda Cornett, Lisa Adams and the late Ray Adams Jr. Her great-grandparents are Charles and Melody Ison, Judy Adams, the late Cleo Jones, the late Lydia Duty and Dewain Cornett.